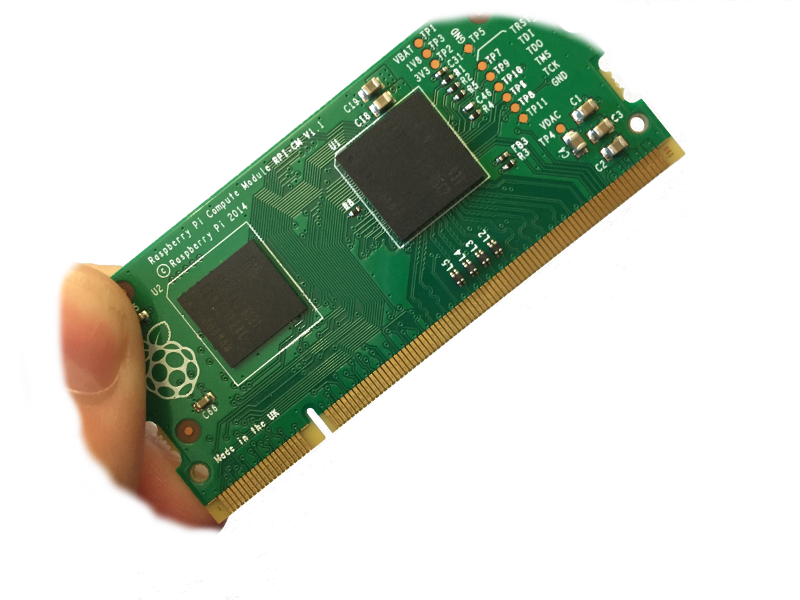 During the design phase of the AutoPi, it was decided to use the Raspberry Compute Module. The Raspberry Compute Module is small, versatile and expandable in a lot of ways, which suited the AutoPi project perfect. All the pinouts from the Broadcom BCM2835 processor is available through the SODIMM DDR2 interface on the Compute Module. This gave us a lot of possibilities during the design phase of the AutoPi and therefore the Compute module was an obvious choice for us as a main processor.

The status of the prototype development at that time, was that the hardware development of the AutoPi was almost done. The prototype consisted of two custom boards for internal components and functions. Together with the Compute Module, the prototype contained 3 separate PCB’s with components on both sides. The Compute Module was connected to the rest of the system through a SODIMM DDR2 connector mounted on one of the custom PCB’s. The complete system was working and we were developing software for the device and backend.

Our initial setup with the Raspberry Compute

On November 26th 2015 the Raspberry Pi Foundation announced its release of their new Raspberry Zero. While we were almost complete with the design of the AutoPi with the Raspberry Compute Module, this needed further investigation. The Raspberry Zero is priced at only 5$ (4£) and just because of this it was much more interesting than the Compute module priced at 20$. Also a lot of the functions provided by our custom boards were already build into the Zero, such as HDMI and USB connection. A negative side was that the Compute Module used a build in 4GB eMMC RAM for memory, while the Zero relied on an external SD card for memory. A closer look at the specification for the Zero, revealed that all of the needed functions for the AutoPi was covered by the outputs on the Zero. The design changes needed to include the Zero was few, so it was decided to use the Raspberry Zero as main processor for the AutoPi.

A full description of the final design of the AutoPi hardware platform, can be seen HERE

Sign up for monthly news from our blog and tips for using your AutoPi device. You can also follow us here

We at AutoPi have prepared a competition for you guys. Enter our latest competition and win a Raspberry Pi 4 Desktop Kit! Check out the rules to enter the competition.

This new generation of AutoPi Dongles have the same look as the old ones, the same price and the same base features, but we have included many new additions.

A Driver Vehicle Inspection Report (DVIR) is a legal requirement in the United States and is being done daily, by drivers, to ensure the vehicle’s health and road safety.

We have implemented ELM327 proxy support to allow users to read out data in 3rd party mobile apps like Torque Lite/Pro on Android or Car Scanner on iOS.

We have a new software release for May 2020. Let’s take a look at all new upgrades and benefits, and how far we got with AutoPi telematics unit 3 this time.

Find out more about how to use a Raspberry Pi Zero as an IoT platform for your car. Get a deeper understanding of the two main topics and what you can do with them.