— People says Web3 is going to revolutionize the internet. However, it can be very complicated subject. Discover a simplified explanation of Web3.

Web3 represents the third generation of the internet and, perhaps, of organizing society. Web3 is to, supposedly, break the internet free of monopolistic control. Let’s take a look at what Web3 is and what it may mean for us.

What is Web3 and how does it work?

The distinguishing aspect of Web3 is ownership. Fundamentally, Web3 refers to a blockchain-based decentralized internet environment. Platforms and applications (apps) created on Web3 will not be controlled by a centralized gatekeeper, but rather by users who will earn their ownership interest by assisting in the development and maintenance of such services.

The first generation of the internet, Web 1.0 (Web1), was read-only for most users, and the second generation, Web 2.0 (Web2), enabled users to read and write on centralized platforms, e.g., Twitter, Tiktok, Facebook. The third generation, Web3, provides people with complete control over their content, data, and assets via blockchains. It gives users the ability to read-write-own.

Within Web2, third parties, such as Facebook, controls your identity and data, whereas in Web3, your identity may travel freely across platforms without being captured and exploited by service providers (third parties).

While Web2 apps are centralized, Web3 equips consumers with tokens, which provides the ability to assist regulate the services they use, resembling a type of ownership on the platforms itself.

Web3 may be viewed as an umbrella term, for an online ecosystem that eliminates the internet’s large intermediaries, as mentioned above. Platforms on Web3 are not controlled by centralized these intermediaries, and you would not use search engines like Google to browse the internet. Instead, it makes use of blockchain, the same mechanism that cryptocurrencies and non-fungible tokens (NFT) make use of. 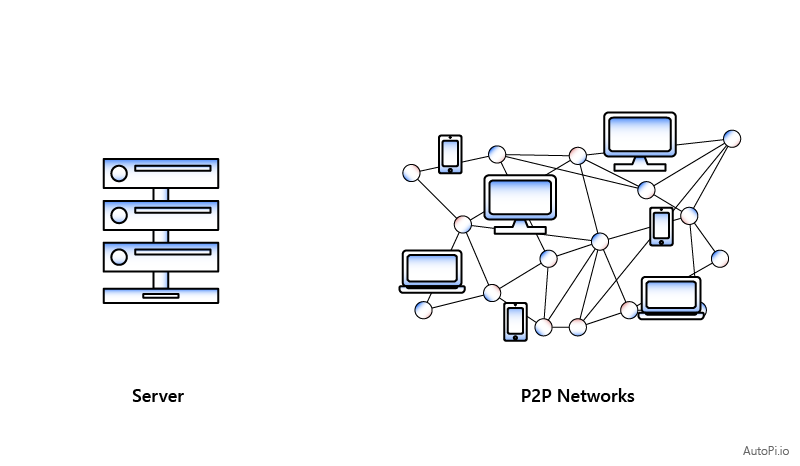 Think of it this way: Web1 referred to the early days of the internet in the 1990s and was considered as a method to democratize access to knowledge, but there were only a few good ways to navigate it beyond, e.g., visiting a friend’s Geo Cities page.

Then, in the mid-2000s, came Web2. Google, Amazon and Facebook arose to bring order to the internet, by making it simple to interact and transact online. According to critics, these corporations accumulated too much influence over time. And Web3 is about reclaiming some of that influence.

So essentially, if Web1 revolutionized information and Web2 revolutionized interactions, Web3 has the ability to revolutionize agreements and value exchange. It alters the data structures in the internet’s backend, by creating a universal state layer, which is enabled by motivating network consumers with a token. 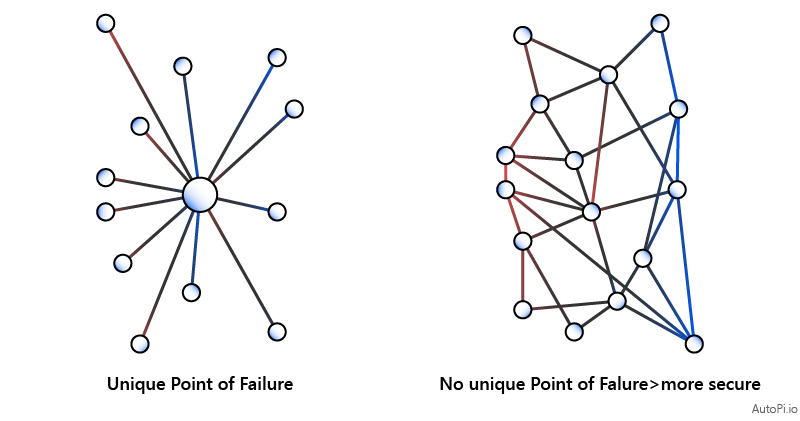 In the future, Web3 may enable the users to manage their own data and go from social media to email to shopping with a single customized account, producing a public record of all of that activity on the blockchain. It is to define structure data and link them in order to improve discovery, automation, integration, and reuse across multiple apps.

According to Web3 supporters, it is capable of improving data management, facilitating mobile internet access, simulating creativity and invention, encouraging globalization phenomenon, increasing consumer happiness, and assisting in the organization of collaboration in social web.

In a way, Web3 is the World Wide Web’s next generation, and makes use of Semantic Web technologies and artificial intelligence.

“The Semantic Web provides a common framework that allows data to be shared and reused across application, enterprise, and community boundaries.” – World Wide Web Consortium

The Semantic Web’s major goal is to drive the progress of the present Web by making it easier for users to locate, exchange, and integrate information. Initially, the Semantic Web was designed as a system that allows robots to “understand” and reply to complicated human requests, based on their meaning. Such “understanding” requires semantically organized knowledge sources.

The Semantic Web was defined by Tim Berner-Lee, the father of the World Wide Web: 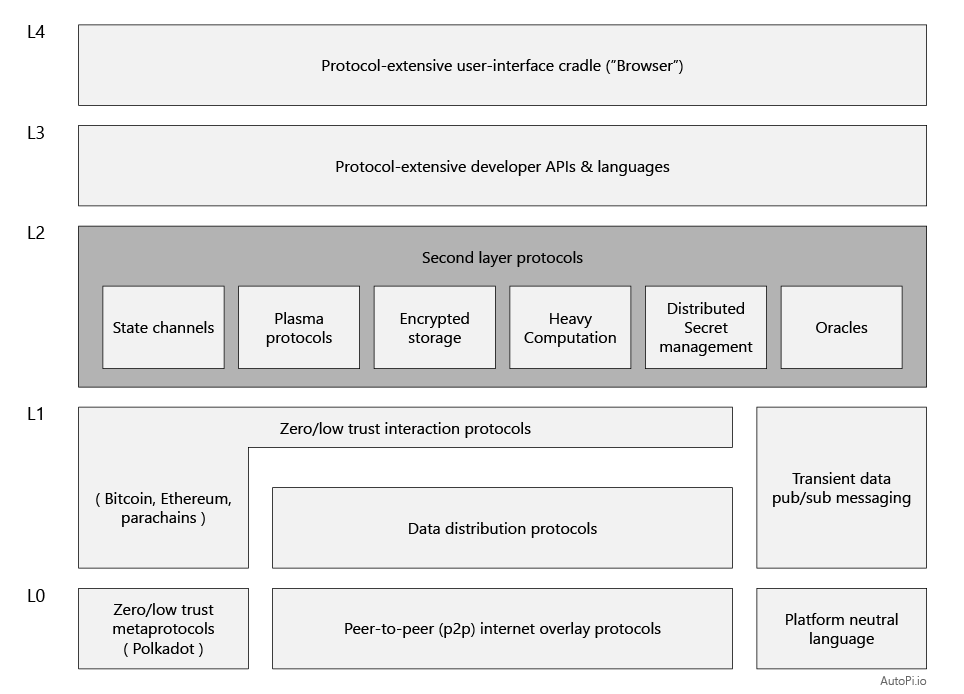 The Web3 technological stack, developed by Web3 Foundation, is still in its early stages, however, it’s beginning to take shape, as advanced technology and innovation starts to emerge over the years.

There are three main basis, that are the foundation of the technology stack. Those are (1) Zero/low trust meta protocols, which is a platform that implements a zero/low trust interaction protocol that allows all participating members to share security. (2) P2P (peer-to-peer) internet overlay protocols, and this is a networking suite that enables nodes to interact decentralizedly. (3) Platform agnostic language, which is a method for running the same software on many physical platforms.

(1) Interaction protocols with zero/low trust, is a protocol that describes how various nodes can interact with one another and trust computation and information from one another. Most cryptocurrencies, such as Bitcoin and ZCash, satisfy the concept of a Zero/low trust interaction protocol, which describes the rules that a node must follow in order to participate in the protocol. (2) Protocols for data dissemination, describes how data is distributed and transmitted between nodes in a decentralized system. (3) Transient data pub/sub messaging, protocols that describe how data that is not intended to be permanently kept, such as status updates, is sent and nodes are made aware of its presence.

The Second-layer protocols includes various components. (1) State channels, is a method for a blockchain to boost scalability by letting nodes interact with each other off-chain, by "opening" and "closing" channels on the main chain, and posting just initial and end findings, rather than recording each state transition on the chain. (2) Plasma protocols, is another method of enhancing scalability by forming a "tree" of blockchains, with the main chain serving as the tree's root and "child" blockchains communicating with higher-level chains as little as possible. (3) Encrypted storage, is the use of cryptography to mathematically encrypt and decrypt data, both at rest (i.e., on a specific machine) and in motion (i.e., being transferred from one computer to another). (4) Heavy computation, provides a technique to distribute computation over several machines while also proving that the computations were executed correctly. (5) Distributed secret management Enables information to be viewed only by authorized persons, including complicated scenarios like "decrypting this information needs all six signers to utilize their key" or "any 5 of 7 signers must agree." (6) Oracles, is a method of introducing off-chain data (like as weather forecasts or stock prices) into a blockchain, often for use by smart contracts.

This layer consist of protocol-agnostic developer Apis and languages, which is Solidity and Vyper (Ethereum), Plutus (Cardano), and Rust are some of the languages that may be used to construct apps without dealing with real bytecode (Substrate). Furthermore, tools such as ethers.js, web3.js, and oo7.js are available to make it easier to construct apps that interface with a blockchain.

The last layer is a protocol-extensive user-interface cradle ("browser"), and is a application that allows a user to engage directly with the blockchain without having to know about implementation specifics.

What are the potential advantages and disadvantages of Web3?

According to a New York Times report, investors have already staked $27 billion on Web3 as the "future of the internet." Although Web3 is still in the works, experts weigh in on some of the benefits and drawbacks of the next generation of the internet.

Following is a list of pros and cons towards Web3.

All of these benefits and drawbacks are based on information that is currently accessible. Web3 is still in the development process, and the final version may change significantly. Until then, we just have to wait and see.

Web3 apps such as Cryptocurrencies, Decentralized Finance, and Non-Fungible Tokens (NFTs) were the first applications to achieve product-market fit and user acceptance. However, cryptocurrency is still held by fewer than 10% of the world’s population. Decentralized financial systems already have over $100 billion in assets, but they are still a drop in the ocean when compared to the traditional financial system. Web3 apps have reached tens of millions of users, but they are still dwarfed by the billions that use Web2 applications.

According to experts, lessons learned from the past two waves of exponential technology – the internet and smartphones – suggest that mass-market applications begin to gain traction once the underlying technology hits 1 billion users.

In comparison, there are currently 180 million Ethereum addresses. Using it as a proxy for Web3 adoption, it will take another 5 years to achieve 1 billion users at present growth rates. 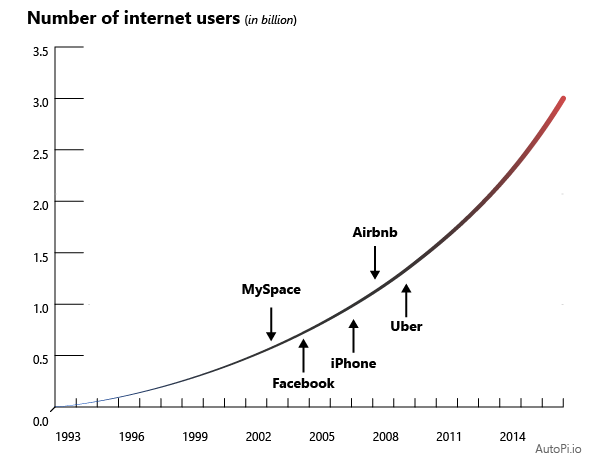 The World Wide Web is a network of interconnected hypertext that may be accessed over the Internet. A web browser is used to view online sites that may contain text, photos, videos, and other multimedia, as well as to move between them using hyperlinks.

Tim Berner-Lee, a British computer scientist, made a proposal for what would eventually become the WWW on March 12, 1989. The idea was intended for a more efficient communication system, but Berners-Lee soon recognized the notion could be used globally.

In 1990, Berner-Lee and Belgian computer scientist Robert Cailliau suggested using hypertext “to link and access diverse types of information as a Web of nodes, in which the user can traverse at whim.” In this manner, the first Web service was created and tested, and it was later confined as the World Wide Web.

Web1 was the very first publicly available web and was, in many aspects, incredibly primitive. During this time, the internet was mostly a collection of read-only pages, with little to no interactivity. Internet giants did not yet exist.

That changed with the advent of Web2, which began about 2004. Not only did interactive sites, e.g., Social Media, emerge, but major corporations took over the internet. These corporations know everything about you and your digital presence. From which shoes you have been looking at, to which daycare you pick up your child.

Web 1.0 technologies include Web protocols such as HTML, HTTP, and URI. The following are the primary characteristics and limitations of Web 1.0:

Web 2.0 is a term to describe the transition of the World Wide Web to a new era of use and service creation. In the following, will we take three centric definitions and expand those, to further understand the Web 2.0.

According to experts, the following are the key characteristics of Web 3.0 and challenges the Semantic Web will presumably face. 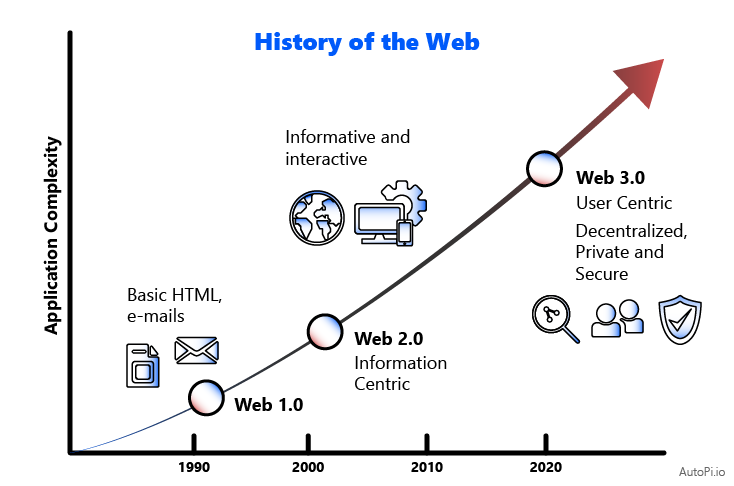 The web is an information space that has advanced significantly since 1989 and is constantly evolving, most likely via the application of artificial intelligence techniques to become a large web of highly intelligent interactions.

Capture and leverage BIG DATA insights for your projects