— LIN Bus protocol is a supplement to CAN Bus, offering lower reliability and performance, but also lower costs. It is commonly used for windows, wipers etc. Learn more.

LIN Bus is basically a cheaper supplement to CAN Bus, providing lower reliability and performance. It is a very common network and is increasing in its popularity.

Once again, we have prepared a simple introduction to LIN Bus. Several topics and aspects have been researched, analyzed and then included, all with the purpose of explaining the LIN Bus and LIN Protocol to you, in a very easy and understandable way.

We have combined expertise from our top tech engineers and wrote this article in a very simple way, in order to make it as easy to understand as possible.

What is a LIN Bus?

LIN Bus stands for Local Interconnect Network (LIN) and is used for communication among components in the vehicle. It is also known as a supplement to CAN Bus.

LIN protocol is very cost effective and much cheaper than CAN Bus. However, it offers a lower performance and is not as reliable as CAN Bus.

LIN Bus came to life when CAN Bus was simply too expensive to implement for every component in the vehicle. Alternatively, LIN Bus was released to solve this challenge and has worked out perfectly.

What is a LIN protocol?

LIN protocol is a wired communication protocol for electronic devices. It consists of one master and one or more slaves.

Each LIN frame consists of two pairs - header and response. The header is always sent by the LIN master and the response is sent by either one dedicated LIN slave or the LIN master.

How Does the LIN Bus Work?

LIN Bus can be also used in the vehicle’s battery power-line, with a LIN over DC (DC-LIN) transceiver, and is standardized as ISO/AWI 17987-8.

Nowadays, LIN Bus is pretty much standardized in all modern vehicles. There are several cases, where LIN Bus is being used such as:

In addition, LIN Bus is also being used in home appliances such as: washing machine, stove, refrigerator and more. The forecast shows the increase in demand for LIN Bus and its applications. Electronic control unit is one of the common applications among many others.

LIN Bus vs CAN Bus 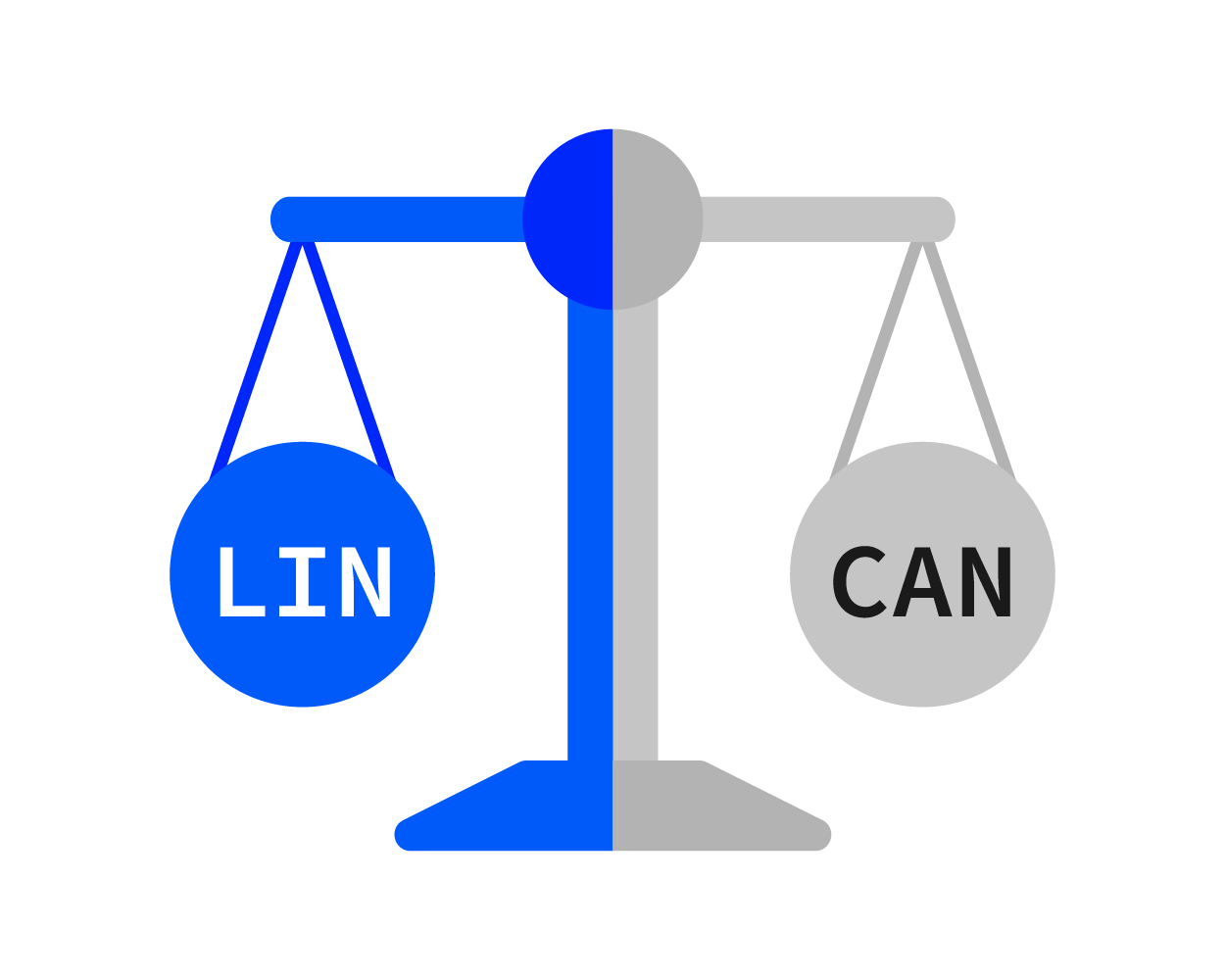 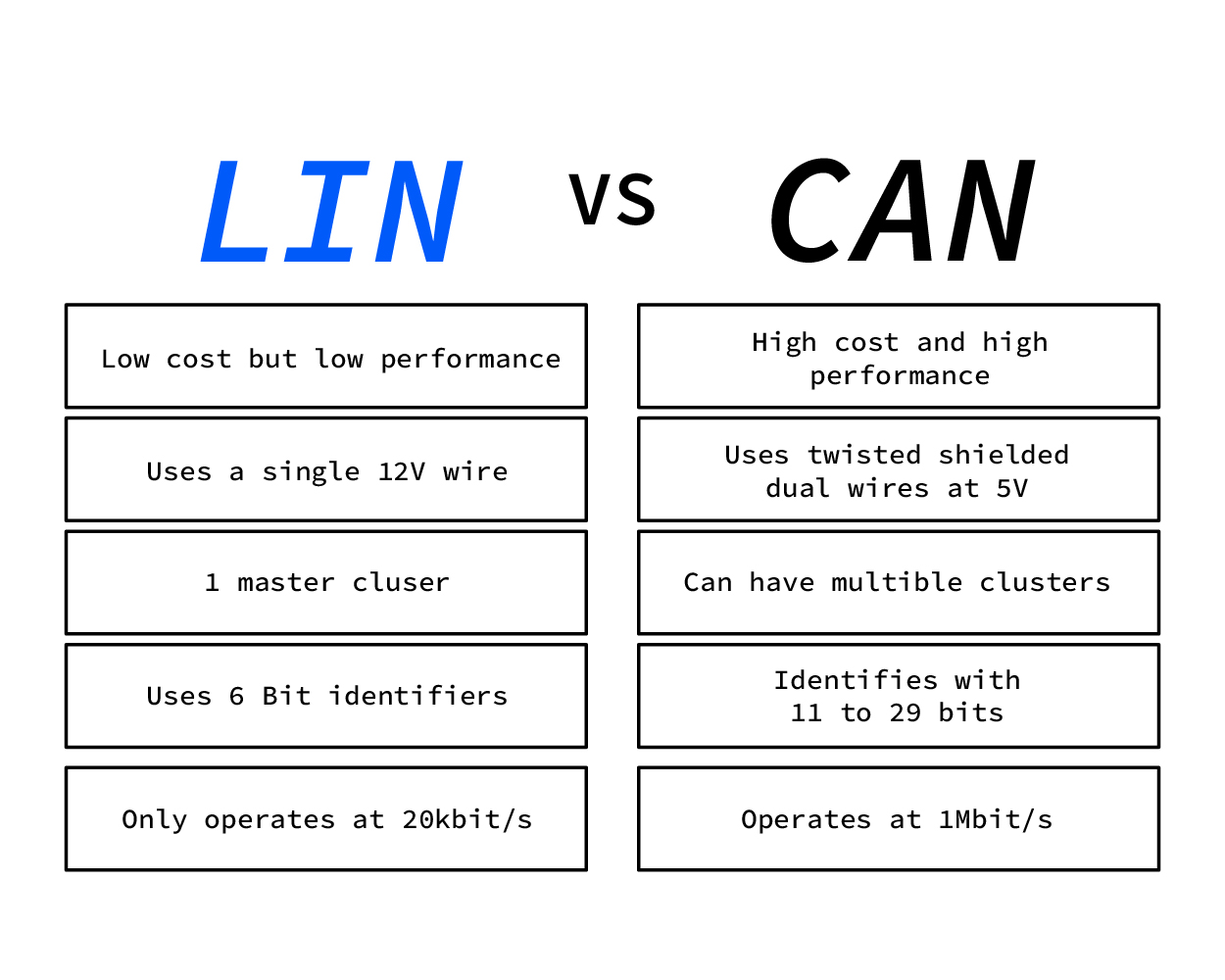 Simply said, the LIN Bus message frame consists of a header and a response. Generally speaking, the LIN master typically sends a header to the LIN bus, which then triggers a slave.

The slave sends up to 8 data bytes in response. An illustration of the LIN frame format can be seen below.

We will now explain to you in details specific parts of the LIN frame format.

In addition, usually one slave is taken for the information at the time. This means that there is zero collision risk and no need for arbitration. The 6 bits allow for 64 IDs, where ID 60-61 are used for diagnostics.

The LIN network is described by a LDF, that includes information about frames and signals. The file is being used for creation of the software in both master and slave.

You might need to decode your raw LIN bus data to physical values as a part of your LIN data workflow.

In order to decode raw data into a readable form, you need to extract LIN signals from the LIN frame payload. LIN Bus decoding is very similar to CAN bus decoding and it requires the same information.

In order to make LIN Bus more understandable, we created a timeline of LIN Bus' history.

LIN Bus is expected to be commonly used in modern vehicles due to its low cost feature expansion.

We have seen a huge increase in popularity of LIN Bus since 2015 and it is expected to increase even more.

We have also heard that LIN Bus might be also used in J1939 for its low cost. However, a lot will change and we hope you will follow it with us.