— Learn everything is there to know about OBD2: What is OBD2? Is your car OBD2 compatible? How do you log car data? And much more. See our quick OBD2 overview!

You may have come across the terms “OBD” or “OBD2” when reading about connected vehicles and car diagnostics.

In this easy guide, we introduce you to several aspects of On-Board Diagnostics, so you will learn all the important information and its key elements.

See below our quick OBD2 overview.

In short, OBD2 is a self-diagnosis system built into the vehicle.

On-board diagnostics is an automotive electronic system, capable of self-diagnosing, indicating and reporting possible problems within the vehicle. It gives you the opportunity to solve the problem and easily access the information about the car’s health, by showing you the malfunction indicator light on your dashboard.

This is your car telling you that you have a problem. Then visit the mechanic and he will use the OBD2 scanner to diagnose the problem. To do this, he connects the OBD2 reader to a 16-pin OBD2 connector near the steering wheel.

Alternatively, if you want to save some money, you are able to do this all by yourself, due to the AutoPi TMU device’s capability. This lets you read OBD2 codes aka Diagnostic Trouble Codes (DTCs) to review and troubleshoot the issue.

How does OBD2 work?

How this works, is that there are multiple sensors in your vehicle. Each sensor sends signal to your vehicle’s computer aka Electronic Control Unit (ECU). The ECU uses the signal/information from your car and adjusts different elements in order.

OBD2 data logging works by connecting the OBD2 logger to the OBD2 connector. The tool allows you to send “request frames” and the relevant control unit sends a “response frame” via CAN. You can decode raw OBD2 response via e.g., OBD2 DBC. This means that you can also use a CAN logger that can send custom CAN frames as an OBD2 logger.

Please note that cars will vary depending on the model/year of OBD2 PIDs they support.

OBD2 and CAN bus connection

The on-board diagnostics is a “higher layer protocol” and CAN is a method of communication. The OBD2 standard specifically specifies an OBD2 connector that contains a set of five viable protocols. In addition, the CAN bus has been mandatory OBD2 protocol for all vehicles sold in the United States since 1996. From 2004 and later, all cars in Europe were required to be OBD2 compatible, and form 2006 and later in Australia and New Zealand.

Is my car OBD2 compatible?

If you are still wondering if your car is OBD2 compatible, then the answer is probably: Yes, it’s compatible. Still in doubt? Check this article.

As mentioned above, CAN bus serves as the basis for OBD2 communication in most cars today. When it comes to OBD2 interface, there are 5 signaling protocols, and vehicles usually implement only one.

ISO 9141-2 | The protocol has an asynchronous serial data rate of 10.4 kbps. It is a bit similar to RS-232, but the signal levels vary. Usually used in Chrysler, European and Asian vehicles.

The OBD2 connector and pinout

The OBD2 connector lets you access data from your car easily. The illustration below is an example of a female OBD2 16-pin (2x8) J1962 connector, which is a standardized hardware interface. In contrast to the OBD1 connector, which is usually found under the food of the vehicle, the OBD2 connector is in most cases required to be within 2 feet (0.61m) of the steering wheel. Here’s a detailed picture of the OBD2 Connector pinout.

Where to find the OBD2 port?

Generally, you will find the OBD2 port under the dashboard panel and steering wheel. 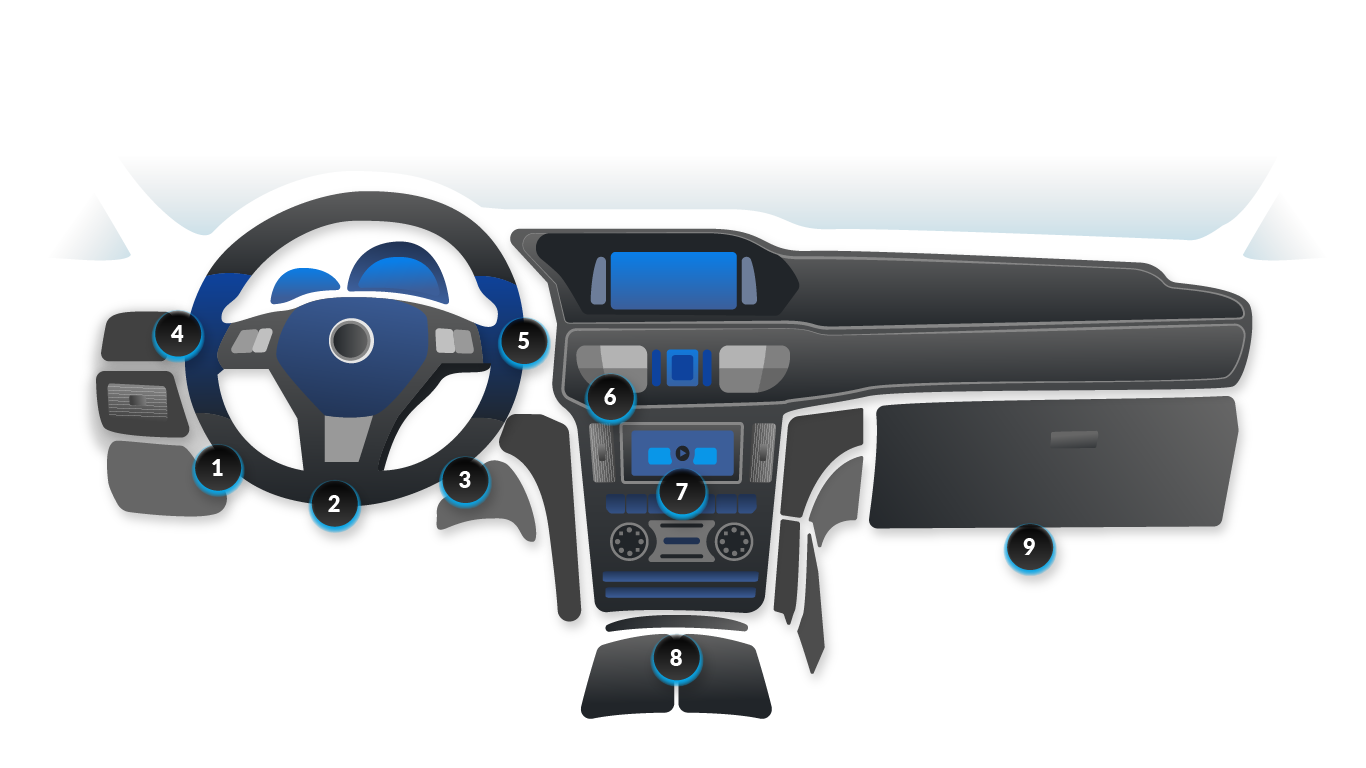 In this Youtube video, we have showcased how to find the OBD2 port and how to connect your AutoPi TMU device to the OBD2 port.

History and the difference between OBD1 and OBD2

The history of On-board Diagnostics goes back to the 1960s, when several organizations started discussing the necessity of having the OBD to detect emission failures.

In 1982, CARB began developing regulations on requiring all vehicles to have an OBD port.

Up until recently, the UN commissioned the ISO to develop the WWH-OBD standard, however, it is currently being defined. More on this subject will come out soon.

1980: GM implemented an interface and protocol to test the Engine Control Module (ECM).

1988: CARB required all vehicles sold in California from 1988 and newer, to have a simple OBD capability as a minimum.

1994: CARB pushed the requirement further and issued the OBD2 specification in all vehicles sold in California from 1996.

2001: EU made it mandatory for manufacturers to include OBD2 in all gasoline vehicles sold in EU.

2004: EU made it mandatory for manufacturers to include OBD2 in all diesel vehicles sold in EU.

2006: All vehicles manufactured in Australia and New Zealand were required to be OBD2 compatible.

OBD aka OBD1 was used during the earlier years of the car manufacturing industry, and were used to connect to the console of a car, while OBD2 aka OBD-II were introduced in car models produced in the early 1990s, and is remotely connected to the vehicle.

OBD2 is an advanced version of OBD1 and offers better signaling protocols and messaging formats. Furthermore, it provides better results for vehicle’s parameters when used in emission control system. 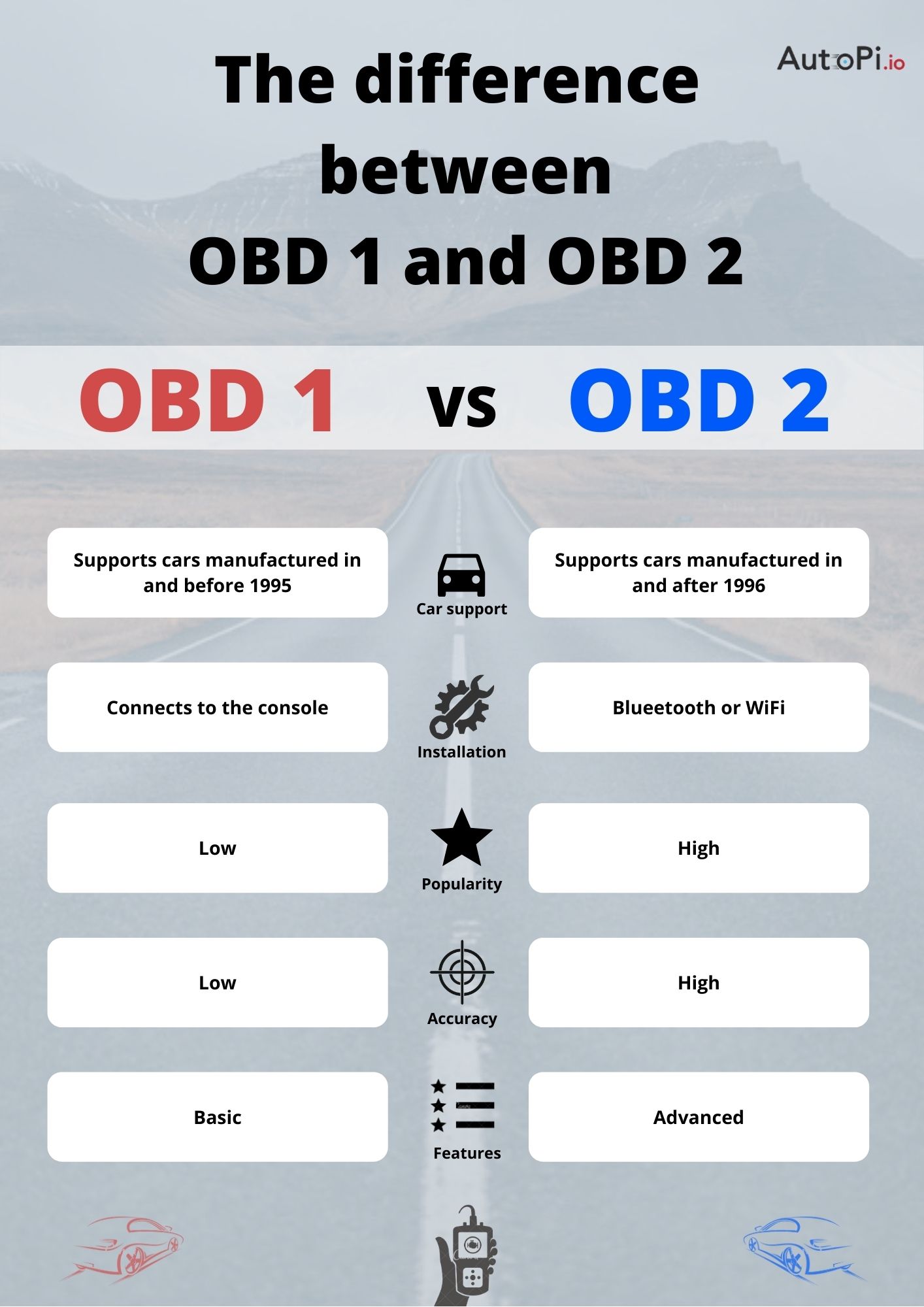 The AutoPi TMU device is connected through the OBD2 port and are able to communicate with the ECUs in your car.

Together with the AutoPi TMU device and the OBD2, you are able to configure lots of features, both as a private consumer and as a business client for e.g., fleet management.

Do you have a use case regarding your OBD2? Get in touch with us!