— CAN Bus (Controller Area Network) is a vehicle bus standard, designed to allow devices and microcontrollers to communicate with each other’s applications.

CAN bus stands for Controller Area Network Communication and consists of two electrical wires called CAN_Low and CAN_High. The information within each vehicle is being transmitted from and to ECUs. In addition, CAN bus is built to handle robust performance within harsh environments.

We have prepared a simple introduction to CAN bus. Several topics have been covered, in order to give you the best explanation of the CAN protocol.

While working on the article, we combined the knowledge from our top experts within the company, as well as non-expertise team members.

Why? The idea was to write a professional but simple guide introduction to CAN bus for everyone, no matter how much experience you have.

In conclusion, it do not matter if you have no knowledge about the CAN bus protocol whatsoever or you are already a pro. This simple guide intro to CAN bus will give you all the information needed. 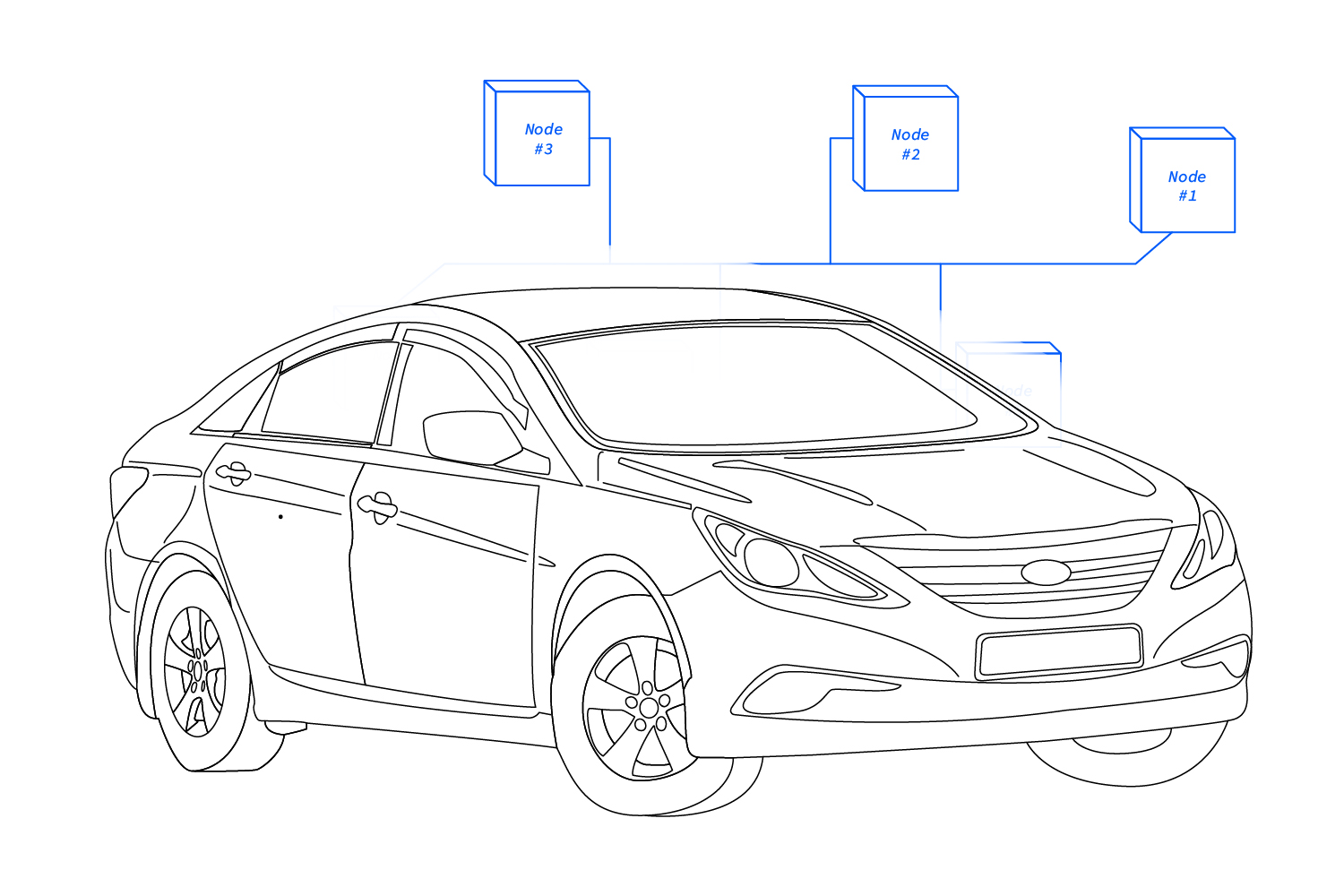 What is CAN bus?

CAN bus is a set of two electrical wires in the car network (CAN_Low and CAN_High), where the information is being sent to and from ECUs. The network that allows ECUs to communicate is called Controller Area Network (CAN).

The CAN bus is a serial communication bus, designed for robust performance within harsh environments, primarily in industrial and automotive applications.

It is basically a vehicle bus standard that allows microcontrollers and devices to communicate with each other.

CAN bus is one of the protocols used in On-Board Diagnostics (OBD). Nowadays, the OBD-2 is mandatory in all newer cars and light trucks all around the globe.

Let us try to look at it from a totally different point of perspective.

Imagine that the car is like the human body and the nervous system in the human body is the Controller Area Network (CAN bus) in the car, which also enables the communication.

Nodes or electronic control units (ECUs) are something like body parts that are interconnected through the CAN bus communication. Information can easily be shared between parties. That is much easier to understand, isn’t it? 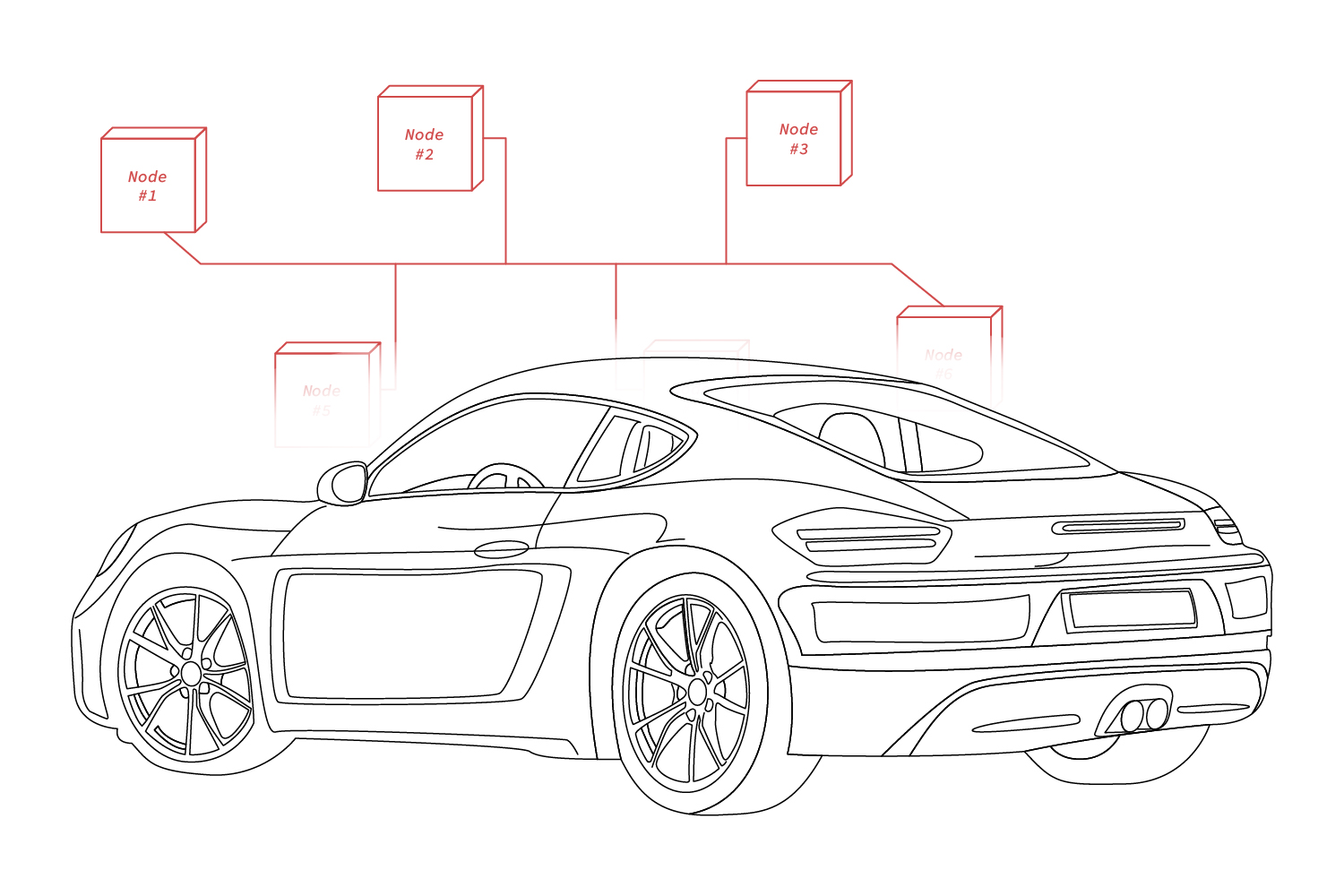 The CAN bus system

Depending on the type of the car, it can have up to 70 ECUs (Electronic Control Units) and each of them needs to be shared with other parts of the network.

Some of the examples are for instance; audio system, airbags, engine control unit, door control unit and so on. The CAN bus enables the ECUs to communicate to each other.

Think about ECUs as specific people. One ECU can formulate and transmit the information via CAN bus to other ECUs that accept the data. After that, they will check the data and decide if they want to receive it or ignore it.

On the other side, ISO 11898-2 represents things such as baud rate, cable length and termination.

5 benefits of CAN bus protocol

CAN bus standard is commonly used in all vehicles due to its key benefits, such as:

One of the best advantages of CAN bus is the reduced amount of wiring in combination with an ingenious prevention of message collision.

In other words, no data will be lost during message transmission.

The two examples below illustrates the CAN protocol and what it would look like with CAN bus system and without the CAN bus system.

Clearly, with CAN bus, it is much easier for nodes to communicate and navigate through. 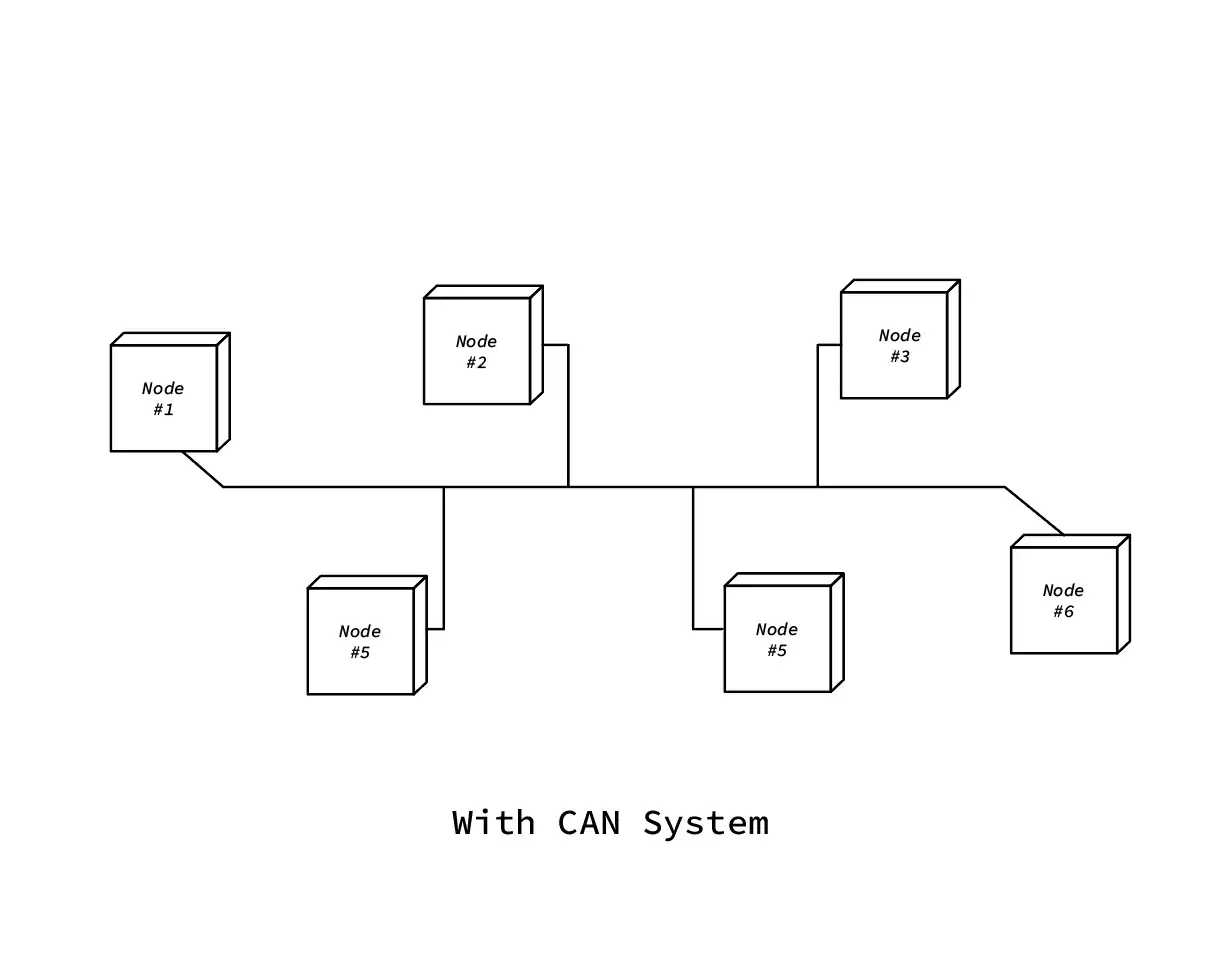 On the other side, without a CAN bus, it is much harder for nodes to communicate with each other and the communication is ineffective. 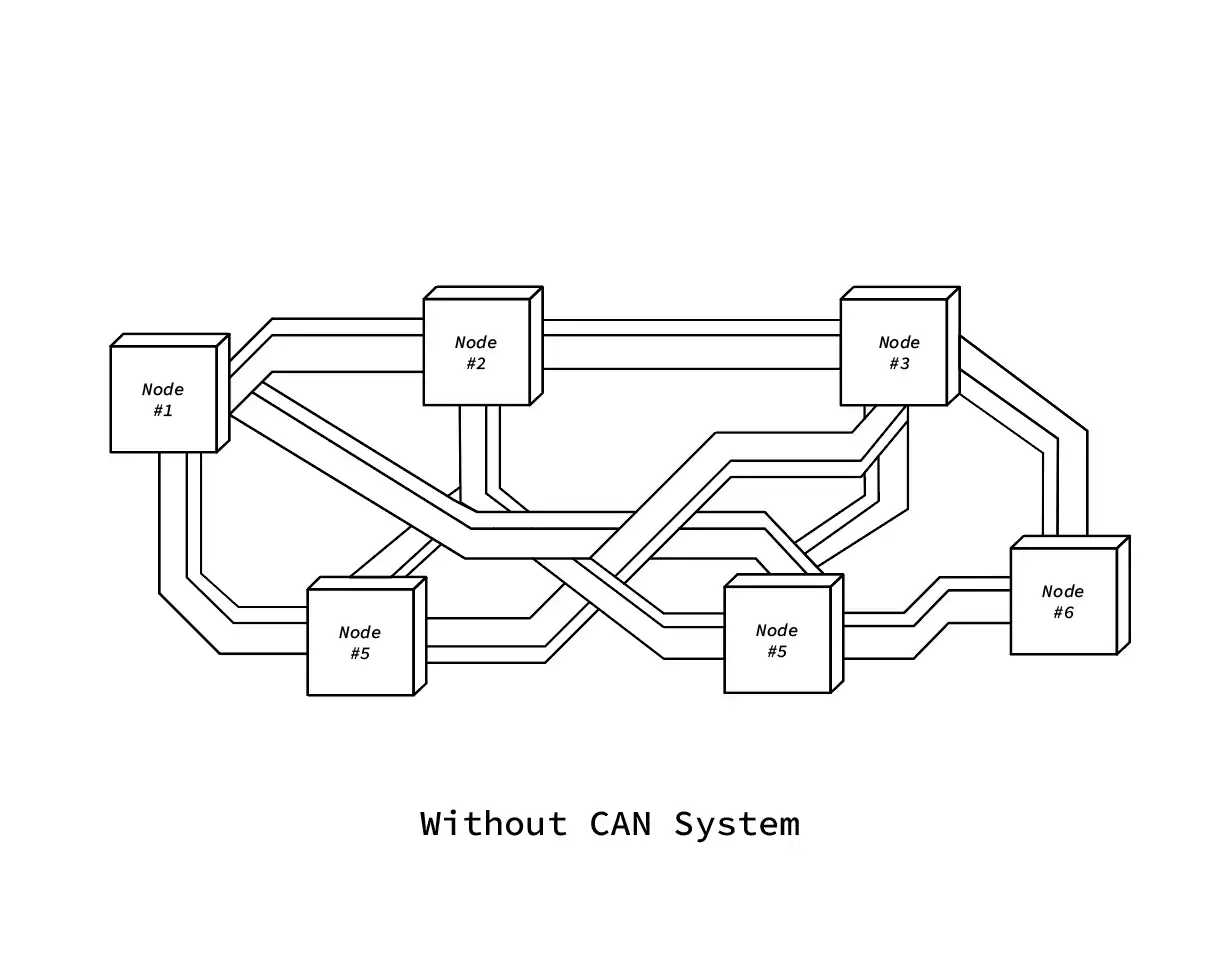 There are several different types of networks. You can find an easy explanation below.

What is a CAN message frame?

CAN frames are used to communicate over CAN bus. CAN uses the differential signal with two logic states - dominant and recessive.

CAN network uses two CAN messages - standard CAN and extended CAN that are described below.

The image below shows a typical CAN frame with an 11-bit identification, which is the kind used in most cars. Except for the larger ID, the expanded 29-bit identifier frame is identical.

The Remote Transmission Request (RTR) is typically dominant, but it becomes recessive when nodes are requesting data from each other.

Next one is the identifier extension (IDE) bit, which is dominant when the standard CAN frame is sent - not extended one. The r0 bit is reversed and not currently used.

Next one is the Data Length Code (DLC), which indicates how many bytes of data are in the current message. Another important part is the data itself, where it is the same number of bytes as in DLC bits.

The next one is the cyclic redundancy check (CRC), which is a 16-bit checksum that detects errors and issues in the transmitted data.

In case the message is properly received, the receiving node will overwrite the recessive acknowledge bit (ACK) with a dominant bit. The end of frame (EOF) indicates the end of the CAN message.

It is 7 bits wide and it detects bit stuffing errors. The last part of the CAN message is the interframe space (IFS), which is being used as a time delay.

Extended CAN frame uses a 29 bit identifier with a couple additional bits. The extended 29 bit identifier (CAN 2.0B) is identical, but has a longer ID and is usually used in the j1939 protocol - heave-duty vehicles. CAN uses two logic states; dominant and recessive.

It also has a substitute remote request (SRR) bit, which comes after 11 bit identifier and acts like a placeholder, in order to keep the same structure as a standard CAN frame.

The identifier extension (IDE) should be recessive and the extended identifier should follow it accordingly.

The remote transmission request (RTR) comes right after the 18 bit ID. The reverse bit r1 follows the path and the rest of the message stays the same.

Logging CAN data can be done from several types of vehicles such as cars, heavy duty vehicles, predictive maintenance and machine blackbox.

The vehicle data are gathered through the OBD2 port and are usually used to reduce fuel costs, improve car mileage and more.

On the other side, data from the heavy duty vehicles are gathered through j1939 and are usually used to improve safety and reduce costs.

Vehicles and machinery can be also monitored through IoT CAN loggers. That can be done in the cloud to avoid breakdowns. A CAN logger can provide data for disputes or diagnostics. It is also called blackbox.

CAN bus logging is commonly used in fleet management, due to its effectivity and increased number of opportunities.

A CAN logger is required to record CAN data. This allows you to save timestamped CAN data on an SD card. In some situations, a CAN interface is required to transmit data to a PC, such as when decoding data.

The TMU SocketCAN allows you to record data from any CAN bus to an 8-32 GB Micro SD Card with ease. Simply attach it to a car or truck to begin logging, and then code the data using our free management software.

Furthermore, the TMU SocketCAN has WiFi, allowing you to automatically upload data to your own server - as well as upgrade devices over-the-air.

Raw CAN data is not easily readable. Therefore we have prepared a guide for you. Check out the guide on how to log raw CAN messages.

The CAN bus supports the basis for communication, but not more than that. The CAN protocol doesn’t indicate how to handle messages greater than 8 bytes, or how to decode the RAW data.

In order to indicate how data is communicated between CAN nodes of a network, a set of standardized protocols come in handy. There are several higher layer protocols such as; OBD2, CANopen, CAN FD and SAE J1939. 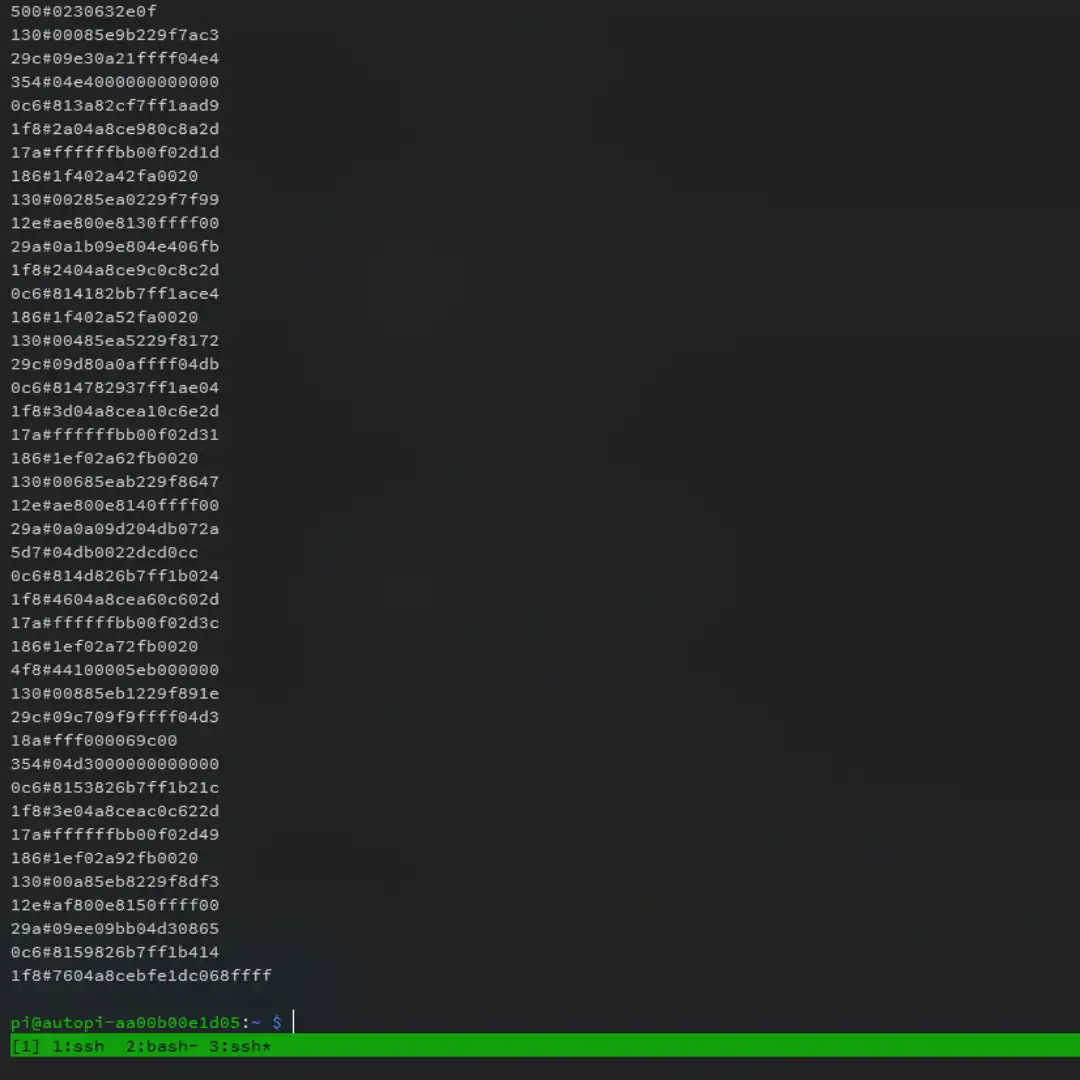 History of CAN bus

In the future, CAN bus will still be commonly used, but influenced by major automotive industry trends such as; growth of Internet of Things and connected vehicles, impact of autonomous vehicles, the rise of cloud computing, the need for advanced vehicle functionality and more.

The need of CAN FD increases and many experts assume it will slowly replace the classical CAN bus protocol. Stay updated to see what happens.