— Automotive Ethernet is a wired network that connects different parts of a car together, to increase bandwidth, reduce latency, and lower wire weight with 30%.

The sophistication of automobiles is advancing at a breakneck pace. What was once science fiction is rapidly becoming reality.

We’ve made so many improvements in the last few years that it’s hard to keep up with them all.

Electric vehicles are likewise becoming more advanced. In order to keep up with the growing number of sensors, controllers, and interfaces, networks will need to be quicker and more dependable.

What Does Ethernet Mean?

Networking protocols and systems based on Ethernet are widely used in Local Area Network (LAN) and Wide Area Networks (WAN). Which all of us practically have implemented in all of our homes.

It was commercially available in 1980 and The Institute of Electrical and Electronic Engineers (IEEE) 802.3 became the first standard for it in 1983.

Traditional Ethernet couldn’t be utilized in cars because it was too loud and prone to interference. But has already shown to be a safe and reliable medium for transferring huge amount of data while also weighing 30% less than standard CAN/LIN harnesses.

What is Automotive Ethernet?

Automotive Ethernet is a wired network that connects different parts of a car together.

For automotive industry, it is designed to fulfill electrical (EMI/RFI emissions and susceptibility) standards as well as network management requirements such as bandwidth and latency.

Automotive Ethernet and traditional buses such as CAN, CAN-FD, LIN, and others will combine to satisfy changing performance needs. For contemporary and future cars to have the communication, safety, convenience, and electrification features required, data volumes and speeds must be managed at higher levels.

Increasing connection has turned the next generation of cars into "computers on wheels." In contrast to the traditional automotive network backbone of CAN buses, Ethernet is expected to replace them in the near future.

This will be discussed in greater detail later in the article. 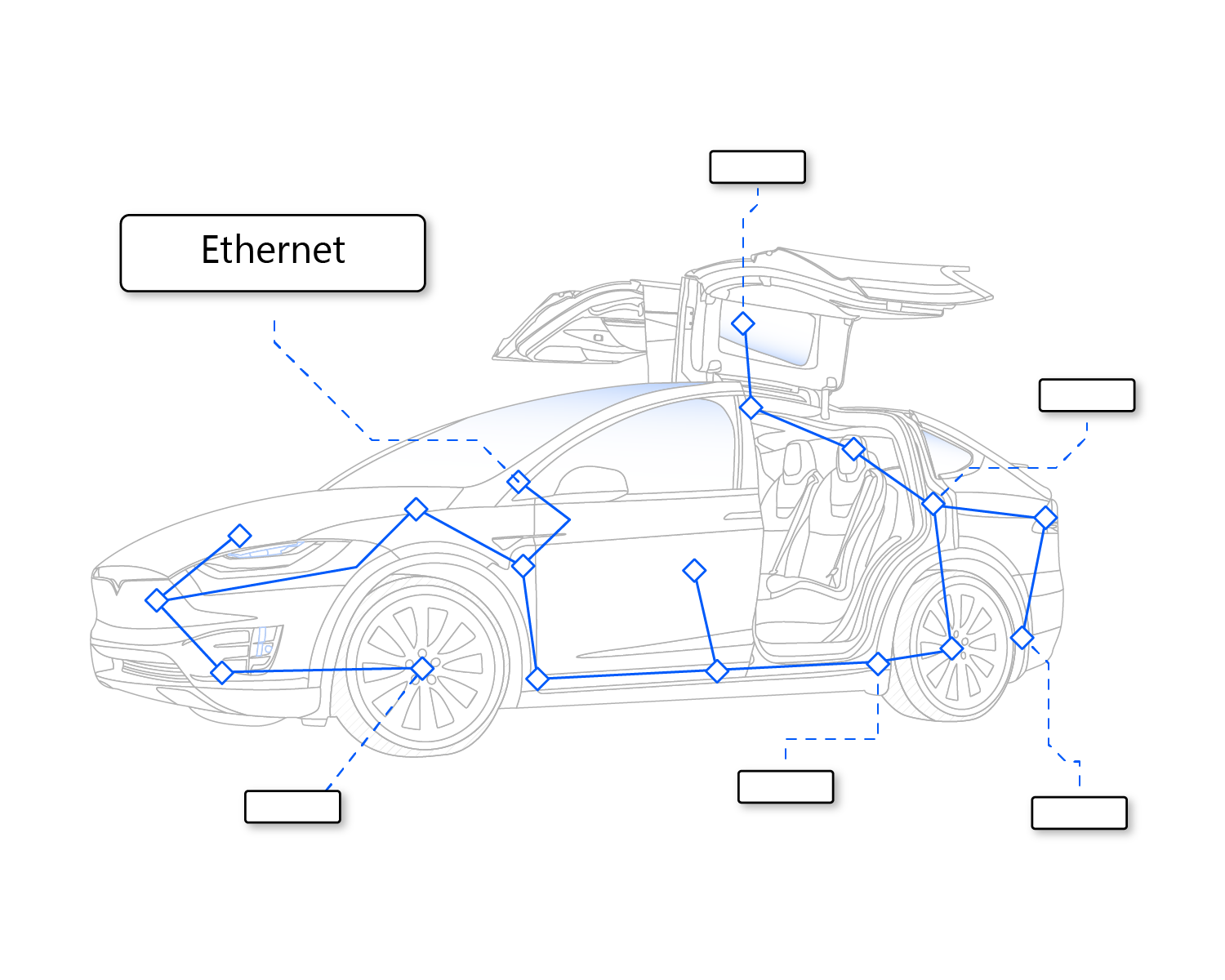 Automotive Ethernet is a point-to point networking method, as opposed to bus technology, where one node or electronic unit is linked to another one.

A switch will be added to the system to link numerous nodes. This will allow many Electronic Control Units (ECUs) to interact with one another and send traffic to different nodes within a network based on their physical address.

100Base-T1 and 1000Base-T1 are the Automotive-specific Ethernet standards designed to address the networking needs of automobiles.

(AVB it refers to a collection of technological standards for switched Ethernet networks that enable better synchronization, lower latency, and more dependability.)

CAN and CAN-FD are not appropriate for audio and video automotive applications since their capacity is just 1 to Mbps.

Comparatively more cost-effective than other networking protocols is automotive ethernet's initial base rate of 100 Mbps.

Various topologies are employed in automobile technology. Point-to-point is a typical networking topology in automobiles.

Often used in Ethernet application in automotive uses star topology, where all the nodes or ECUs are connected to a central switch.

The safety-critical applications in the vehicle employ ring architecture, whereas the in-car infotainment systems based on automotive ethernet typically use star topology.

Electronics, computers, and networks play a larger and larger part in automobiles as time passes.

The car is no longer a collection of separate, basic systems, but is instead becoming an integral component of our increasingly linked environment.

Some examples of automotive networking-related technologies being developed and/or deployed are as follows:

Nowadays, you can buy a car that has internet connectivity built in via cellular or Wi-Fi.

These systems will be able to deliver real-time traffic information, communications, and video streaming, as well as remote diagnostics and firmware upgrades that need access to the vehicle's internal networks and computers.

V2V will be used for cars to talk and coordinate with each other.

Safe distances and evasive maneuvers may be calculated and carried out by knowing what other cars are doing and receiving information on the interaction between vehicles and other objects.

V2V communication technology may avert 79 percent of collisions between the two targets.

Dashboards with augmented reality will provide information on roadside items.

When the driver turns towards an object, the car will display information on the windshield, such as distance, and allow the driver to zoom in to examine details in the distance.

Additional, if there's a hazard, an arrow will emerge directing you away from it.

Passengers may also benefit from these kinds of advancements.

Autonomous vehicles will be able to transport passengers and perform deliveries without the need assistance of a driver.

In order for automobiles to process and interpret information as quickly and reliably as people, if not more, they must use cameras, radars.

These automobiles may make better use of road space by "platooning" and parking extremely near together.

How Automotive Ethernet has Changed Over Time

In-vehicle networking has evolved phenomenally from CAN bus to CAN FD to support high-speed data transfer from 1 Mbps to 5 Mbps correspondingly.

In the early 1990s, CAN bus was developed to support engine, chassis, and body electronics networking.

It is difficult for networking protocols to manage such high bandwidth of data when using many ADAS sensors such as the LIDAR-based ADAS sensor to detect lanes or perform other ADAS tasks of at least 70 Mbps per sensor.

Despite enormous challenges related to robustness, temperature changes, and huge amounts of real-time data coming from in-vehicle sensors and intelligent ECUs, the automotive industry has adopted Ethernet, which can accommodate high bandwidth data in real time and ensure that in-vehicle systems work seamlessly.

100Base-T1 Ethernet is The Next Generation of Automotive Networking Technology.

The number of ECUs used in automobile electrical systems continues to rise in complexity.

As a result of these new ECUs sharing real-time data on a much larger scale, the need for network bandwidth has increased.

Fast Ethernet uses techniques like superposition and encoding and scrambling algorithms (along with a few passive components) to minimize EMI, cable weight, cost, and footprint size.

It relies on the lessons gained from 10BASE-T and 100BASE-TX to fulfill the rigorous criteria for vehicle emissions, cable weight, cost, and footprint size of this technology.

OEMs will have the last say on how and where 100BASE-T1 is installed in their cars.

However, it's a gateway technology that makes it easier to implement networking in automobiles, which in turn helps to advance the design of automobiles and their systems.

AVB and reduced twisted-pair Ethernet have recently advanced standards, making Ethernet deployment in automobiles a reality. Greater bandwidth, lower costs, and lighter vehicles all encourage industry players. Ethernet is ready to replace or link together the many communication methods.