— Electric vehicles are really exploding in popularity nowadays, but do you really know what it is? Discover how EVs work, how chargers work, etc.

Electric vehicles account only for a small portion of the entire automobile industry today, but their popularity is growing as automakers enhance their range, performance, and appearance – in addition, charging gets faster, simpler, and more convenient.

Despite the fact that the first prototype electric vehicle was invented in the 1800s and numerous versions were constructed in the 1900s, the EV industry only began in earnest after the turn of the twenty-first century. According to Marketsandmarket, it is expected to expand from 4 million units to 34 million units by 2030, at a CAGR of 26.8 percent.

What is Electric Vehicle?

The acronym for electric vehicle is EV. Basically, EVs are cars that are partially or entirely powered by electricity.

An electric vehicle is one that runs on electricity and have minimal operating expenses due to fewer moving parts to maintain and are particularly ecologically beneficial due to their usage of little or no fossil fuels (petrol or diesel).

While some EVs used lead acid or nickel metal hydride batteries, lithium-ion batteries are generally regarded the norm for current battery electric cars since they have a longer life span and are good at retaining energy, with a self-discharge rate of just 5% per month.

Electric Vehicles operate by connecting into a charging station and drawing power from the grid. The electricity is stored in rechargeable batteries, which power an electric motor, which moves the wheels. Electric vehicles accelerate more quickly than vehicles powered by traditional gasoline engines because they are lighter.

EVs have 90% less moving components than gas/petrol vehicles. These are the components that keep an EV running (these will be explained further in the next chapter):

How does an Electric Vehicle work?

In general, a battery electric vehicle (BEV) functions as follows:

The following are the primary essential features of electric cars installed in practically all types:

In an electric car, the battery serves as an electrical energy storage device in the form of direct current (DC) power. If the battery receives a signal from the controller, it will provide DC electrical energy to the inverter, which will then be utilized to power the motor. The battery utilized is a rechargeable battery that has been configured in such a way that it forms what is known as a traction battery pack.

The electric traction motors will turn the gearbox and wheels because the controller delivers electrical power from the traction battery. Some hybrid electric vehicles employ a generator-motor that serves as both propulsion and regeneration.

There are still a number of key electric vehicle components to consider, such as:

What are charging stations and how do they work?

How long does it take to charge an electric vehicle

The range of an EV is determined by the size of its battery (kWh). The larger the kWh of the EV battery, the more power, and the greater the range of the car. 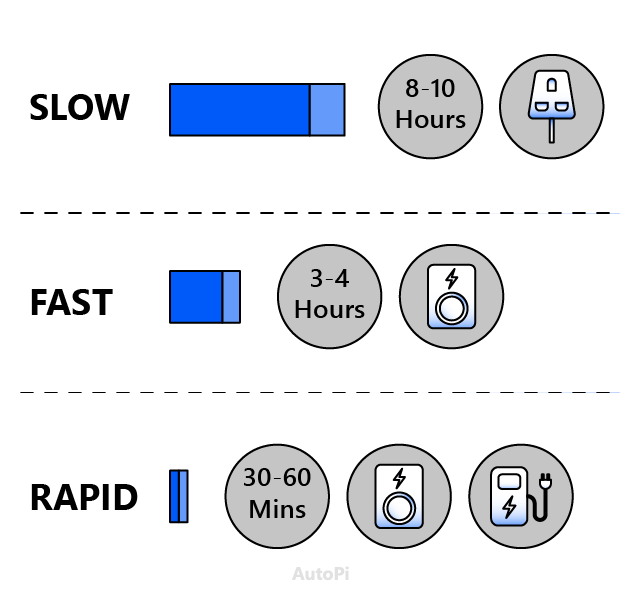 In general, any type of vehicle may be outfitted with an electric powertrain. These are three major instances of what electrification can achieve for vehicles:

Battery Electric cars are those that are completely electric, have rechargeable batteries, and do not have a gasoline engine. The battery pack, which is recharged from the grid, provides all the energy for the vehicle.

BEVs are zero-emission cars since they produce no hazardous exhaust emissions or air pollution threats like typical gasoline-powered vehicles do. 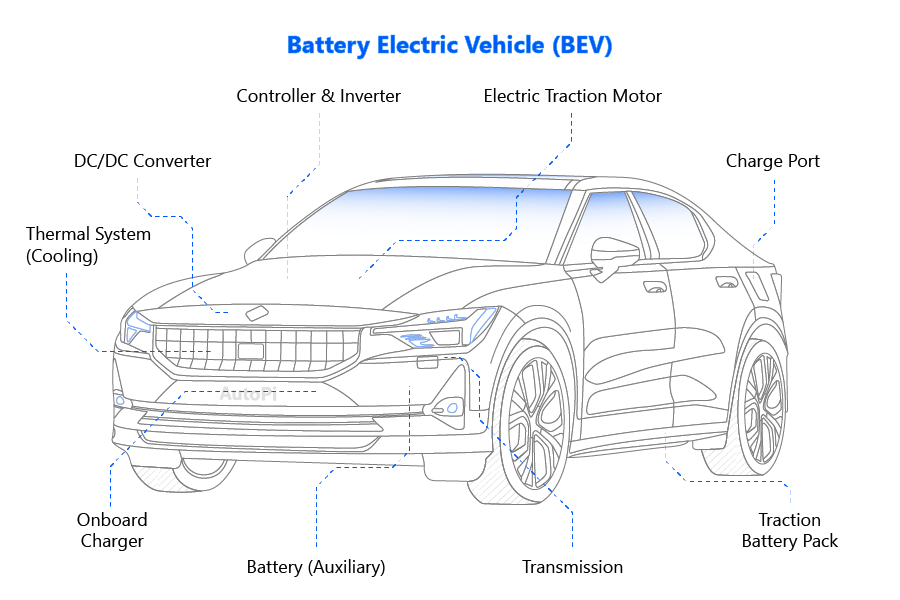 Hybrid Electric Vehicles are powered by both a gas engine and an electric motor.

The battery receives all its energy from regenerative braking, which recoups otherwise lost energy in braking to aid the gasoline engine during acceleration.

This braking energy is generally wasted as heat in the brake pads and rotors of a standard internal combustion engine car. Regular hybrids cannot recharge by plugging into the grid. 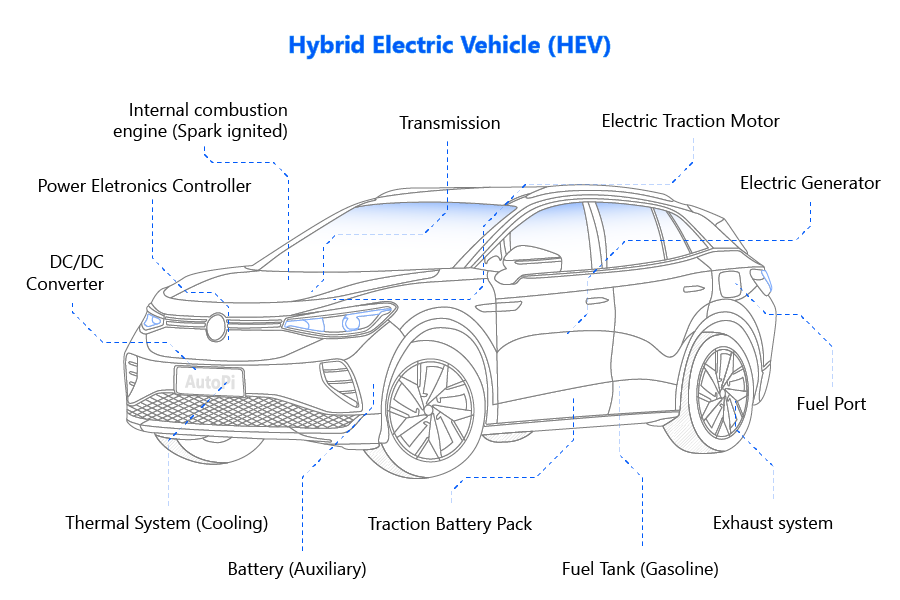 Plug-in Hybrid Electric Vehicles are powered by both an engine and an electric motor. They, like ordinary hybrids, can recharge their batteries via regenerative braking.

When the all-electric range is reduced, PHEVs behave like ordinary hybrids and may drive hundreds of miles on a single tank of gasoline. 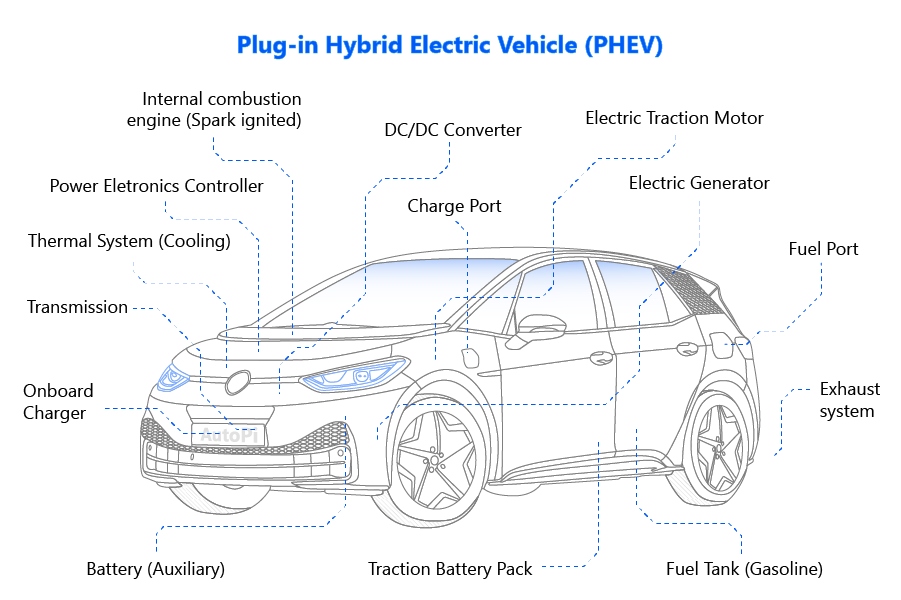 7 Distinctive Characteristics of an Electric Vehicle

EVs are well-known for their comfort, innovative features, and good environmental effect. They've been a big subject for the past decade, and businesses have been working hard to rid the world of CO2 emissions.

So, what is it about electric vehicles that makes them so popular? Here are seven distinct characteristics of an EV: 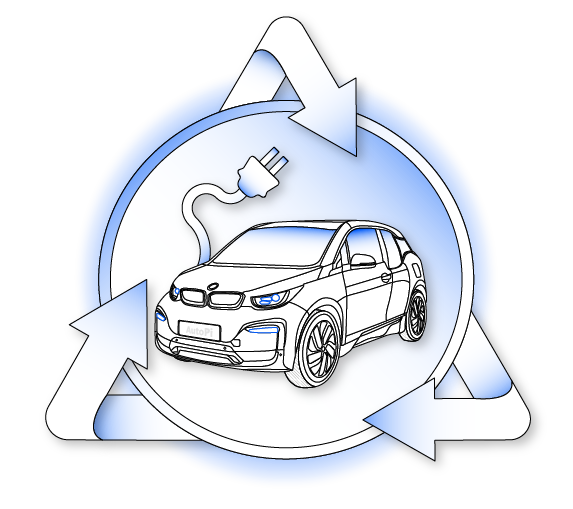 It is hard to write about electric vehicles without mentioning one problem — global warming. The recent years, in particular, has witnessed significant shifts in climate compared to a decade ago, and the situation will only deteriorate if nothing is done.

Electric cars are critical to fulfilling global climate change targets. They play an important role in mitigation strategies that restrict warming to well-below 2°C or 1.5°C, which is consistent with the Paris Agreement's objectives.

However, while EVs emit no greenhouse gases directly, they run on power that is still mostly produced from fossil fuels in many areas of the world. Energy is also used in the production of the electric vehicle, namely the battery.

Simply said, electric vehicles provide cleaner streets, making our towns and cities a better environment for walkers and cyclists. According to EDF, just one electric car on the road may save an average of 1.5 million grams of CO2 over the course of a year.

The world's leading players in the electric vehicle market

Established firms such as Tesla (US), BYD (China), Volkswagen AG (Germany), BMW Group (Germany), and Nissan Motors (Japan) lead the electric vehicle industry. The market ranking was calculated by using a proportion of the segmental revenue for each of the firms mentioned.

These businesses also provide a wide range of products and services to the automobile sector. Furthermore, they have extensive global distribution networks and invest substantially in R&D.

The important market trends or technologies that will have a significant influence on the electric vehicle industry in the near future include EV battery price reductions, connected cars, battery management systems, Smart charging, and wireless on the go charging.

The worldwide electric vehicle market is estimated to sell 34 million units by 2030, expanding at a CAGR of 26.8 percent during the forecast period.

Factors such as rising demand for low-emission commuting and government subsidies and tax breaks for long-range, zero-emission cars have driven manufacturers to produce electric vehicles globally. As a result, there is an increasing market demand for electric automobiles.

During the first months of the epidemic, most EV manufacturers suffered losses owing to a drop in sales. Sales rose in the latter months as demand for zero-emission vehicles increased, although the firms generally faced varied degrees of loss.

The History behind Electric Vehicles

Tesla CEO Elon Musk stated during the 2021 Annual Meeting of Stockholders that it will take many decades for the globe to transition totally to Battery Electric Vehicles (BEVs). According to Elon Musk, it will take 30-40 years to replace all of the world's cars with BEVs.

Today, there are several transportation alternatives on the market, ranging from electric trains to one-wheel skateboards. Technology sure is amazing, and we can't wait to see what the future will bring.