— WWH-OBD is an acronym for World Wide Harmonized On Board-Diagnostics, and is employed to monitor the emissions output of passenger- and commercial vehicles.

WWH-OBD is an acronym for World Wide Harmonized On Board-Diagnostics.

WWH-OBD is a name for an international standard for the worldwide harmonization of vehicle diagnostics and is used to monitor the emissions output of passenger- and commercial vehicles.

Since the early 1980s, On-board Diagnostics (OBD) has been at the forefront of car diagnostics. OBD was made required in nearly the entire automobile sector.

Over a few decades, organizations such as ISO and SAE, and other stakeholders have required for standardization in the development of automotive components. This includes on-board diagnostics.

Today, several engineers question if the OBD-II will be sufficient for a vehicle’s on-board diagnostics, if other units interact with the OBD system, e.g., advanced features like Telematics.

The automotive ecosystem has been moving towards harmonization in recent years. In addition, a trend toward standardization may be noticed in the Transport Protocol as well as diagnostic methods.

AUTOSAR and Unification of Diagnostics Services (UDS) are well-known examples of standardization, thus, the harmonization of the OBD is logical procedure.

The OBD-II interface provides access to data from the powertrain ECU and the emission control module. The system may also retrieve any DTCs recorded for these control units.

Though, the extent of OBD-II has a limit. A lot of diagnostic data is overlooked, due to only 10 modes dedicated to primarily emission-related data.

The UDS has been in charge of off-board diagnostics, enhancing diagnostics data from cars, e.g., odometer, seat-belt warning, etc. UDS was designed to be a more complete and unified diagnostic system, with 20+ modes and access to considerably more information, compared to OBD-II.

WWH-OBD makes the UDS services available within the OBD-II system. Together with UDS, additional protocols used in WWH-OBD transport and network layers include Diagnostics over CAN (DoCAN) and Diagnostics over Internet Protocol (DoIP).

Consequently, the harmonization is incorporated into the equation.

The WWH-OBD was established as a Global Technical Regulation by the United Nations.The major focus here is on emission-relevant vehicle diagnostics for commercial vehicles, with passenger automobiles being included later.

WWH-OBD is based on the 7-layered OSI model and represents a standard that allows communication between the OBD system of a vehicle and external test equipment. The objective of WWH-OBD is to replace regional vehicle diagnostics standards for pollution monitoring with worldwide on-board diagnostics standards.

The United Nations (UN) commissioned the ISO to develop the WWH-OBD standard, which is currently being defined.

The ISO 27145 standard was especially designed for the implementation of WWH-OBD standards.

OSI Model Based on OBD-II and WWH-OBD 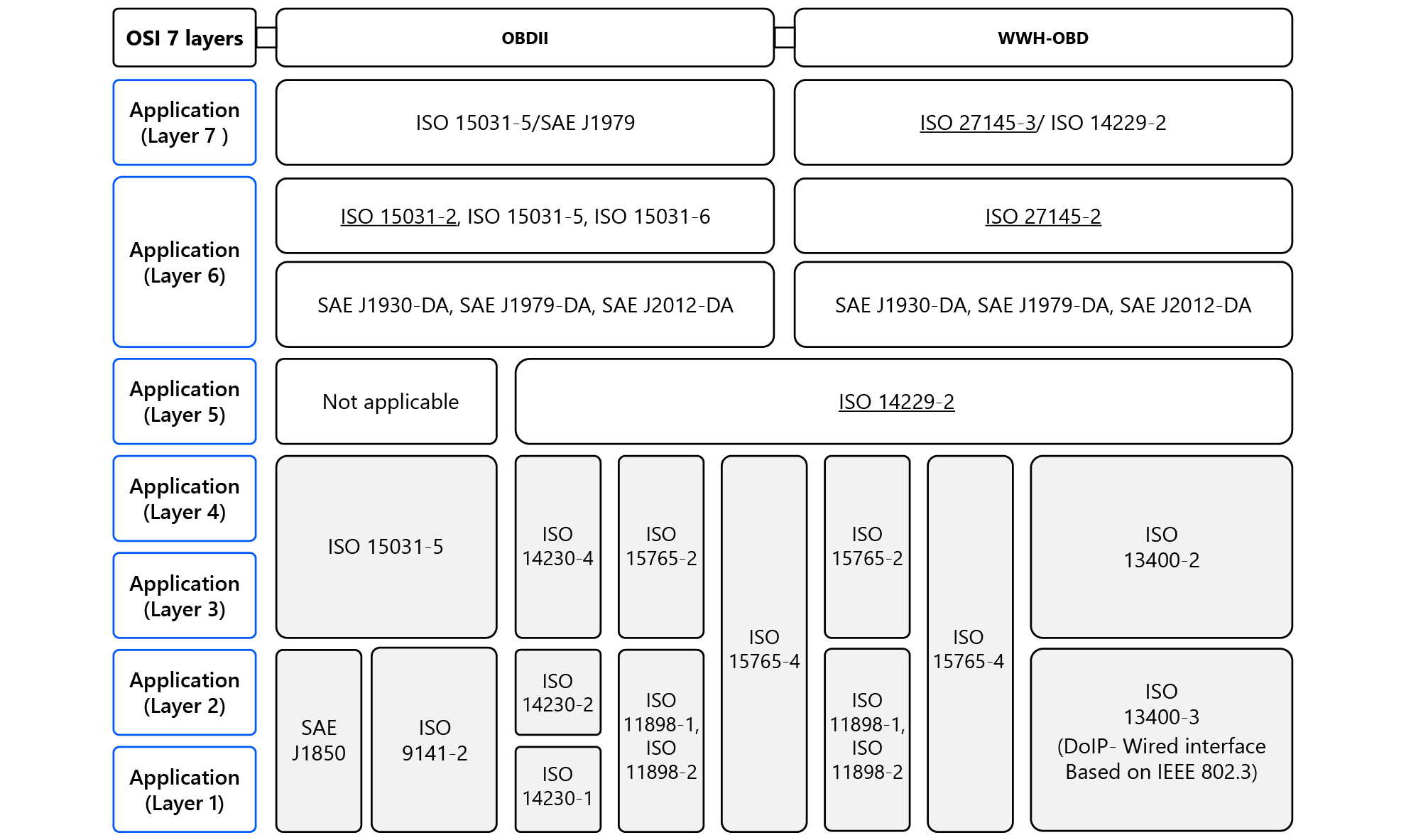 The figure clearly shows which new components have been incorporated in the WWH-OBD design.

The most notable are UDS (ISO 14229) at the application and session layers, DoIP (ISO 13400) at the transport and network layers.

Finally, the WWH-OBD Connection between Vehicle and test equipment (ISO 27145-4).

When it comes to managing the on-board diagnostics of a modern data-intensive vehicle system, WWH-OBD has plenty of benefits.

WWH-OBD has more access to a broader range of data types.

E.g., OBD-II PIDs are just 1 byte long, meaning there are only 255 distinct data types. WWH-OBD PIDs can be up to 3 bytes long, resulting in more accessible vehicle data.

In addition, WWH-OBD has the benefit of expanding the information included in a fault. To indicate when a fault has occurred, OBD-II currently employs a 2 bytes DTC.

Additionally, WWH-OBD provides further information regarding the fault, such as severity, class and status.

In short, WWH-OBD enhances the current OBD-II architecture by providing more diagnostic information to the user.

WWH-OBD Connection between Vehicle and test equipment (ISO 27145-4) is designed to become the sole communication standard for gaining access to vehicle on-board diagnostics.

WWH-OBD might soon completely replace OBD-II as the on-board diagnostic system, not merely as a more dependable diagnostics protocol, but moreover as a forerunner of automotive industry standardization and harmonization.

Customized solutions for fleet developers that ensures all applications can securely be developed, tested and shipped to any environment.