What is the main difference between GNSS and GPS?

— Global navigation satellite systems (GNSS) allow radio receivers to determine their 3D space position and time, with an accuracy of 2 to 20 meters.

GPS is owned by the government of United States and operated by the United States Space Force. GPS provides global coverage with 24 satellites. GPS was previously called Navstar GPS.

Galileo is owned and operated by the European Union and provides 24 operational satellites and 6 spares. Initial services were launched back in 2016. Galileo should have a better accuracy than the GPS.

GLONASS is owned and operated by the Russian Federation and provides 24+ satellites.

NavIC is owned and operated by the government of India and provides 7 satellites. NavIC was previously called IRNSS.

BDS or BeiDou is owned and operated by China and provides 35 satellites. BDS was previously called Compass.

QZSS is owned by the government of Japan and operated by QZS System Service Inc. It currently provides 4 satellites covering East Asia and Japan, with plans to expand to 7 satellites by 2023.

A satellite navigation (satnav) is a system that provides autonomous geo-spatial positioning by using satellites. Small electronic receivers are allowed to determine their location using time signals transmitted with a line of sight by radio from satellites.

How does GNSS work?

The performance and accuracy of GNSS is assessed by four criteria:

The performance of GNSS can be improved by regional satellite-based augmentation systems (SBAS), such as the European Geostationary Navigation Overlay Service (EGNOS).

How EGNOS helps improving the accuracy and reliability of GPS?

GNSS (Global Navigation Satellite System) and GPS (Global Positioning System) work together, where GNSS is a generic term for any satellite constellation and GPS is a specific data provider, owned by the U.S.

All mobile phone use GNSS, not GPS. GNSS is a constellation of all data providers and offers more accurate data than any specific satellite system alone. GPS is most likely the most popular satellite system, as it was the first one released to consumers.

However, we have several satellite systems that provide accurate data to us and therefore, we are these days talking about GNSS in general, not just a GPS.

In conclusion, GNSS has more accurate data as it combines information from more satellites and uses its enhanced technologies.

What is the GNSS used for?

GNSS is used in multiple devices and applications, such as mobile phones, navigation systems in cars and much more. We are so dependent on GNSS nowadays that we would not be able to navigate in different cities and even in our cities we grew up in.

The demand increases rapidly and therefore, it requires advanced technologies to keep up with the demand and provide consumers and organizations with accurate information.

The technology is being used and hugely applied in smart cities, to improve the infrastructure and safety of its citizens. It is a crucial aspect in the Police and First Responders industry, to get to the exact position in the least time possible.

The technology is used in many more industries, such as: 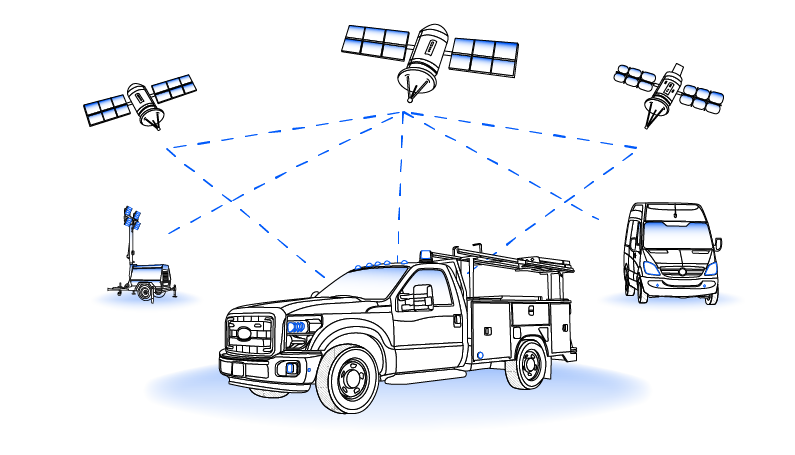 The solution tackles down multiple challenges within the automotive industry and helps businesses to improve their operations. Monitoring fixed assets is a critical task and many companies struggle with it. It can all me easily managed and monitored through the fleet management software.

GNSS accuracy depends on multiple factors, such as surrounding buildings, trees, vehicles, current weather conditions, position of the satellites and more. The signals can be harder to get into the receiver if they are conflicted with surrounding distractions.

GNSS is the most accurate technology as it uses its enhanced technologies and combination of several satellite systems, being able to provide precise information within a few centimeters to meters.

We are used to talk about GPS, as it was the first GNSS system available to consumers. However, several more satellite systems have been released, which helps to gather more accurate data.

Many devices can use multiple GNSS systems at the same time, for more accurate data and coverage. Therefore, nowadays we are talking about GNSS, not only about GPS.

Customized solution for fleets that increases the complete visibility of every assets in real-time.