— CANopen is a CAN based communication protocol, and a standard file specification for embedded networking systems used in automation.

This article contains a simple tutorial introduction to CANopen, in order to give you a non-professional and simple explanation of the CANopen protocol.

In this article we present the CANopen communication protocol basics, combined with the object dictionary, services, PDO, SDO and master/slave nodes.

CANopen is short for, "Controller Area Network, the Open Communication Solution Dissemination Project," and is a CAN based communication protocol and device configuration file specification for embedded networking systems used in automation.

CANopen was developed as a standardized higher-layer protocol for embedded control systems with very flexible configuration functions. CANopen is very practical, as it enables off-the-shelf interoperability between machines and provides standard methods for configuring devices, with plug-and-play capability.

Originally, it was designed for motion-oriented machine control networks. Today, however, it is used in other application fields, such as medical equipment, off-road vehicles, maritime electronics, railway applications, or building automation.

How Does CANopen Work?

Every CANopen device must implement certain standard functions in its control software.

The communication unit implements a protocol for sending and receiving messages with other nodes in the network, such as; control the startup and reset of the device through the state machine. It must include state initialization, before running, running and stopped. Transition between states by sending out network management (NMT) protocol communication objects to the device.

The object dictionary is a 16-bit index list of variables. In addition, each variable can have an 8-bit sub-index. Variables can be used to configure the device and reflect its environment, that is, contain measurement data. After the state machine is set to the operating state, the application part of the device actually performs the required functions of the device. The application is configured by variables in the object dictionary, and data is sent and received through the communication layer in the OSI model. 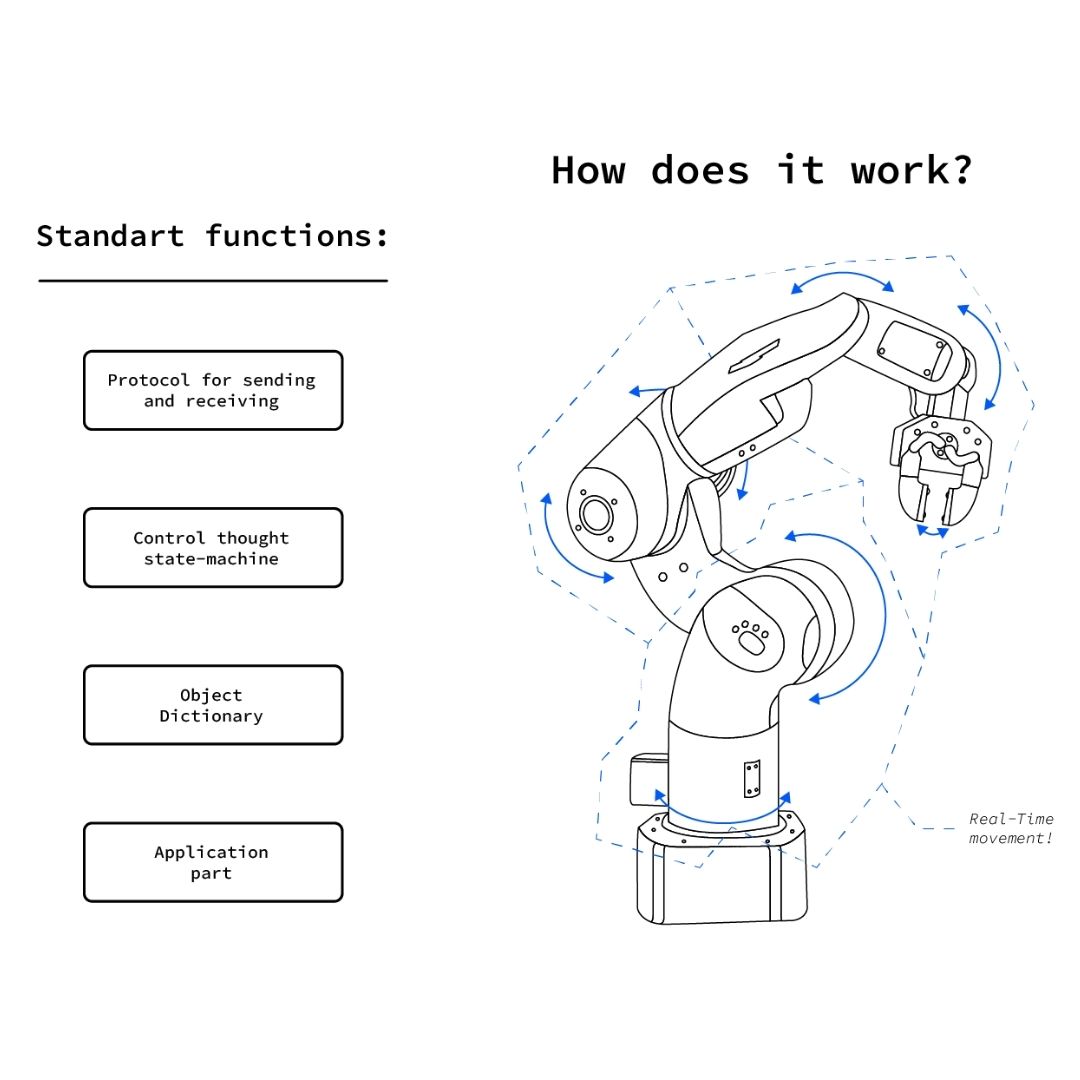 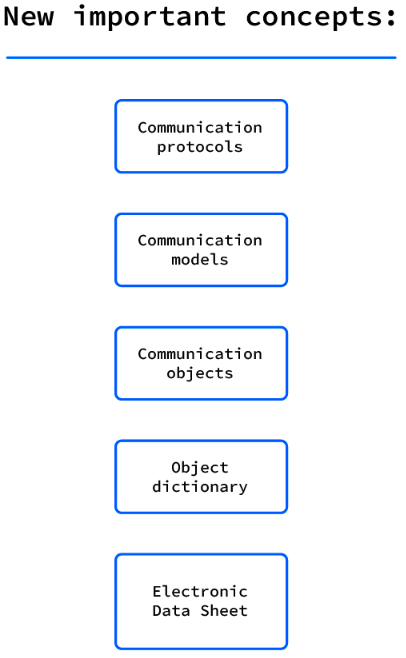 CANopen adds a range of new important concepts, that is built on the CAN bus and e.g., J1939.

Communication models - There are 3 different kinds of models that are used in the messaging between CANopen nodes: Master/slave, client/server and producer/consumer.

Communication objects - All communication objects (application data and configuration parameters) of the device are described in its object dictionary in a standardized way. These objects can be accessed via a 16-bit index, and for arrays and records, there is an additional 8-bit sub-index.

Electronic data sheet - Electronic Data Sheet is a file format defined in CiA306, which describes the communication behavior of the device and object dictionary entries. In this way, tools such as service tools, configuration tools, and development tools can handle the equipment correctly.

CAN and CANopen in the OSI Model

As we mentioned previously, the CANopen protocol is a higher-layer protocol that is built on the CAN bus. The first two levels are covered by CAN: physical layer and data link layer. The physical layer interprets the lines used, voltages, high-speed characteristics, etc. The data link layer includes the fact that CAN is a frame-based protocol. 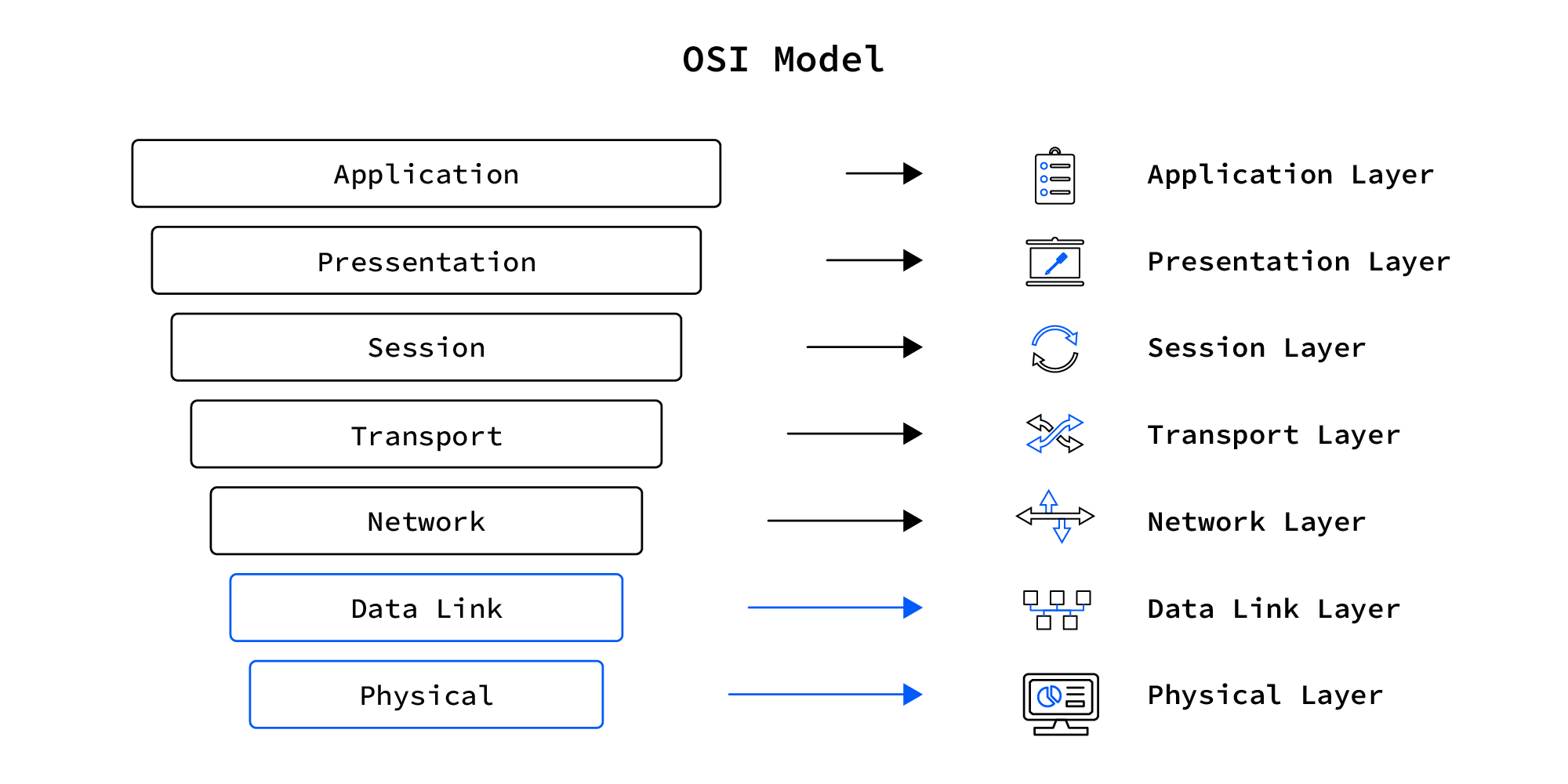 Several devices communicate within a CANopen network, e.g., industrial robot arms with multiple automation components that are integrated by a PC or PLC. CANopen provides three models, which facilitate communication between the nodes. 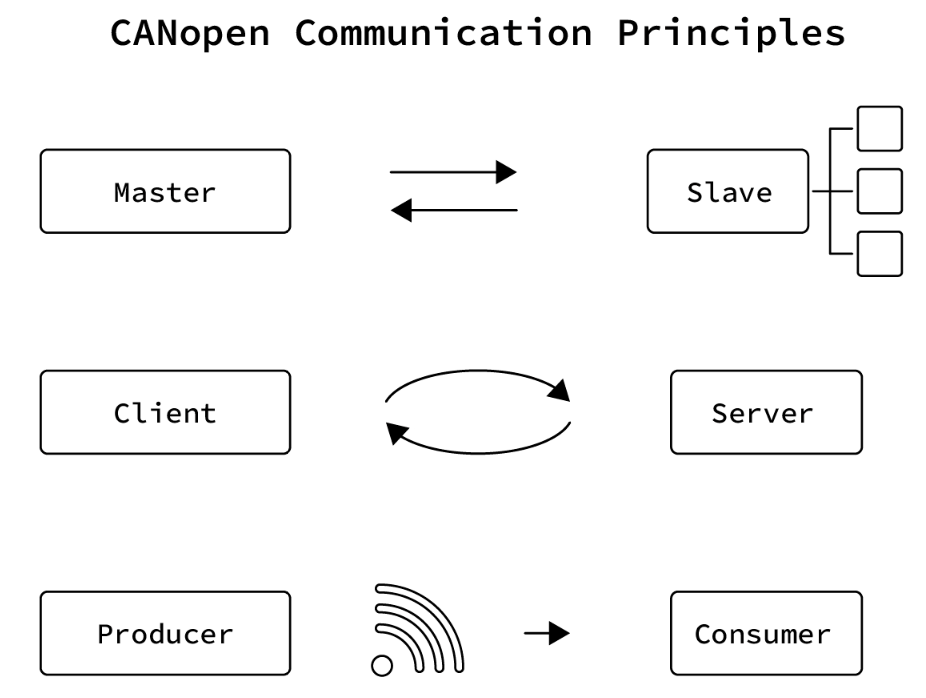 Master/Slave: The control interface acts as application master controller and sends/requests data from the servo motors i.e., the slaves.

Client/Server: A client sends a data request to a server, which replies with the requested data.

Consumer/Producer: The producer node broadcast data to the network, which is consumed by the consumer node.

CANopen communication protocols implement several CANopen COBs (CAN-ID and the control bits) that are communicated with one of the CANopen bit-rates. The communication objects enable system designers to transmit control information and react to certain error conditions or influence and control network behavior. 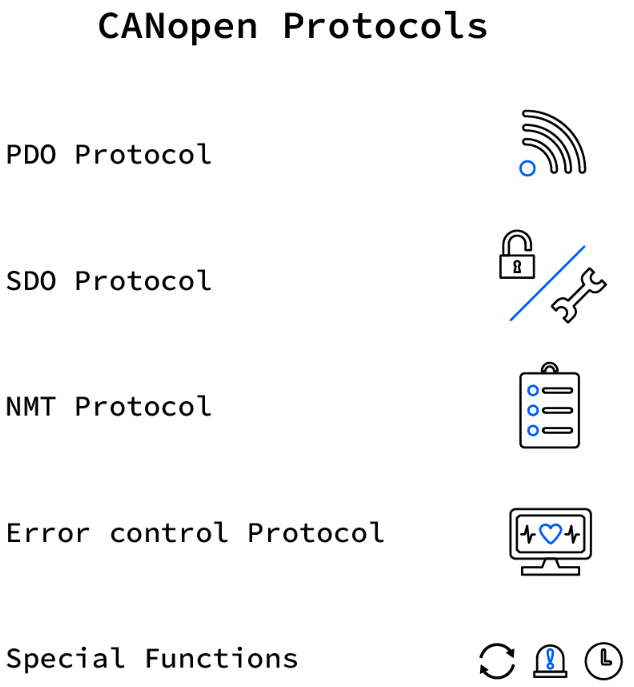 The CANopen protocols include:

The PDO and SDO protocols are critical since they are the foundation for most CANopen communication.

It is important to break down the CANopen CAN frame in order to comprehend CANopen communication:

The message format of the CANopen frame is based on the CAN frame format. In the CAN protocol, data is 11-bit or 29-bit CAN-ID, control bits (such as remote transmission bit (RTR), start bit and 4-bit data length field) and 0 to 8 bytes of data.

It is usually called COB-ID in CANopen, which is composed of CAN-ID and control bits. In CANopen, 11-bit CAN ID is divided into two parts: 4-bit function code and 7-bit CANopen node ID. The 7-bit size limit limits the number of devices on the CANopen network to 127 nodes.

All COB-IDs must be unique to prevent conflicts on the bus. In SDO communication, there should always be only one node that needs to access each object dictionary index of the slave node. 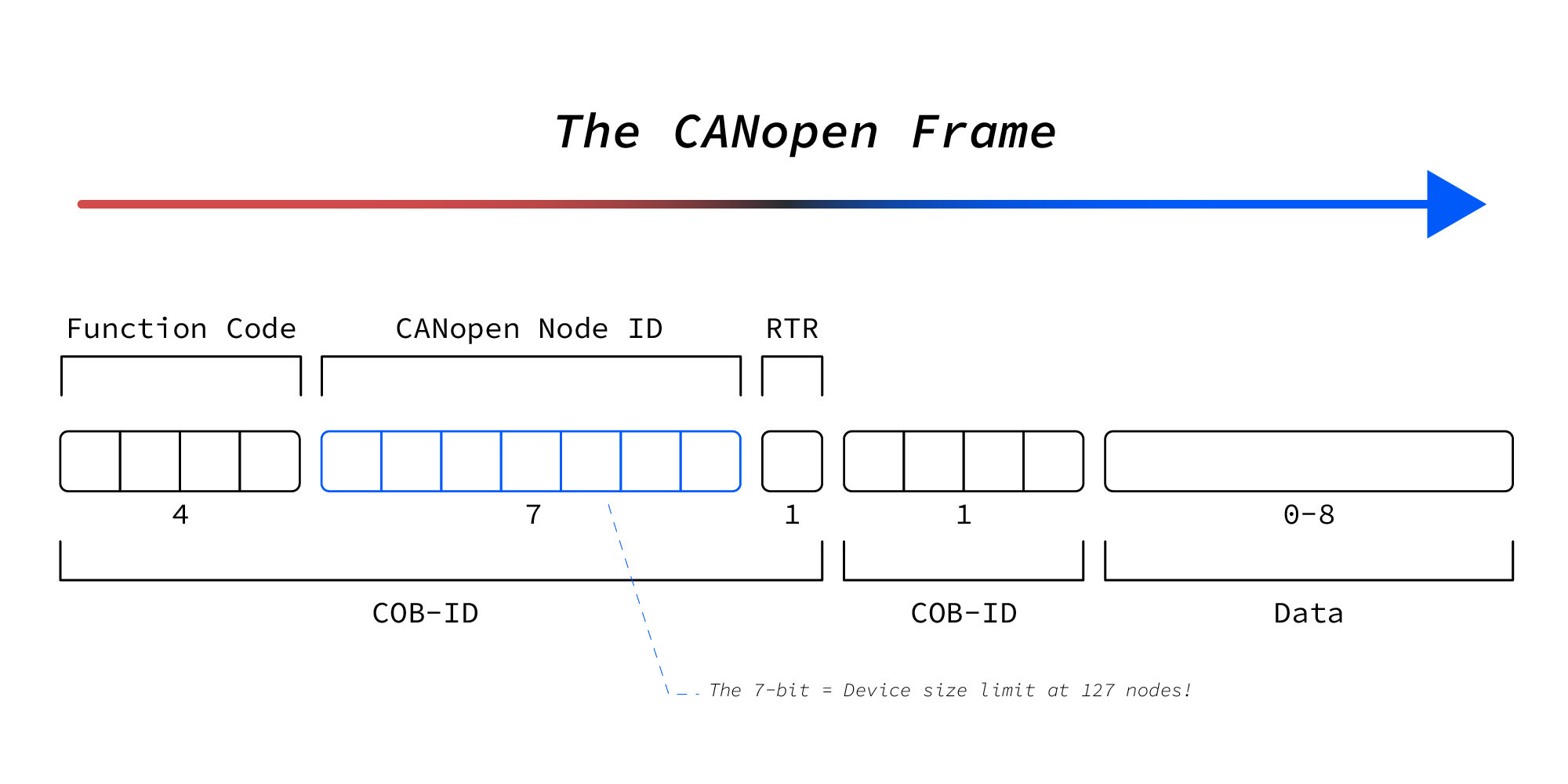 As mentioned above, an object dictionary (OD) is needed for all CANopen nodes and is one of the central themes.

Essentially, CANopen is a table that processes data and stores configuration. In other words, it is a standardized structure that contains all parameters that describe a CANopen node’s actions.

The object dictionary is the means of communicating with a CANopen computer. E.g., in the manufacturer-specific section of the object dictionary, one might write true to the index, which the system would interpret as an activate signal for acquiring data from a voltage input.

Each node on the network must also implement a server that handles read/write requests to its object dictionary, according to the CANopen protocol. This enables a CANopen master to communicate with the server as a client. The Service data object is the framework for direct access (read/write) to the server's object dictionary.

Process data refers to data that can change over time, such as the node controller's inputs (sensors) and outputs (motor drives). The object dictionary also stores process data. However, since SDO communication only allows access to one object dictionary index at a time, accessing constantly changing data can be time consuming.

A node must also be able to send its own data without having to be polled by the CANopen master, according to the CANopen protocol. As a result, a particular method of transferring process data is used, called Process data objects.

We can help you with your current project and build tailored solutions even for your specific needs. Contact us and find out more.